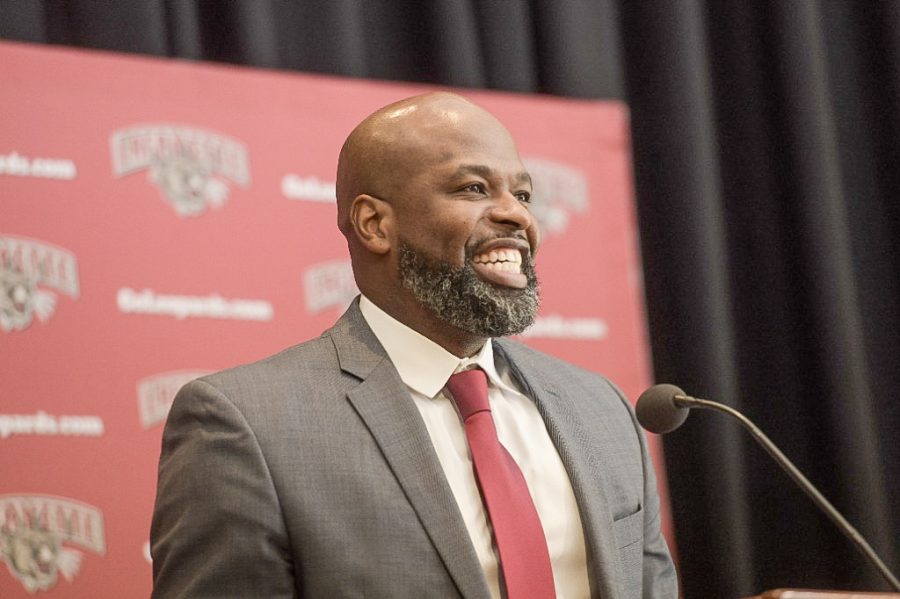 Mike Jordan looks to make his mark as the new basketball coach after leaving a positive impact on the programs at Colgate and Drexel. (Photo Courtesy of GoLeopards.com)

Following the Jan. 21 announcement that legendary Lafayette Head Coach Fran O’Hanlon was retiring, Freeman got to work on selecting candidates for the next chapter of the basketball team.

“Hiring a coach is not about checking boxes, it’s about identifying someone who will embrace our family, care about this place as if it were his own while working hard every day to achieve our goals of creating a championship culture and creating positive student experiences for our student-athletes,” Freeman said during the press conference.

The search committee landed on Colgate University’s Assistant Coach Mike Jordan, who has been coaching since 2012 and helped the Raiders achieve a 15-game winning streak to close the season and make the NCAA tournament in the 2021-2022 season.

“This first week here has been great, I think everybody has welcomed me with open arms. [I’m] in the process of meeting everyone, but it’s been great,” Jordan said.

Jordan was with the Raiders from 2012-2020 where he worked to turn around their program to achieve consecutive 20-win seasons for the first time in school history. He also spent the 2020-2021 season with Drexel University and helped lead them to their first Colonial Athletic Association Title and their first NCAA tournament in 25 years.

Jordan said he is looking to make an immediate positive impact at Lafayette, a team that has only seen two winning seasons since 2013.

“To me, it’s about the work and developing the players, and at Drexel, I got in there and I was able to help guys get better and I think it helped by the end of the season,” Jordan said. “It’s a matter of working hard, accountability and doing things the right way with integrity.”

Freeman hired Jordan to reform the program as part of Hurd’s mission to establish a “New Lafayette” that is not held back by the word “or.”

“Lafayette is a place where, in a world of people saying ‘or’ all the time, we say ‘and’,” Hurd said during the press conference. “The power of our student-athletes to show everybody what academic excellence and what athletic prowess on the court looks like.”

“I think there needs to be a good balance between athletics and academics, and that’s good way to approach it with ‘and,’ not ‘or.’ I’m on board with that,” Jordan said.

Jordan, a native of the Philadelphia neighborhood Germantown, is no stranger to showcasing that academic excellence. He started his career playing basketball and studying sociology at the University of Pennsylvania, where he was a three-time All-Ivy League First Team selection and the 2000 Ivy League Player of the Year.

“I went to Penn because I knew I was going to get a great education, but I also knew they had a great and storied basketball program, and it was going to be a great experience on and off the court,” Jordan said.

Jordan has placed a large emphasis on recruiting and helping the best players in the Patriot League come to Lafayette College. After playing at Penn, recruiting for a city school at Drexel and then recruiting for rural Colgate for 10 years, Jordan has experience drawing academically dedicated athletes to play in both suburban and urban areas.

“It’s all about location. There are so many high schools around in that area that I think it is easier, growing up there and knowing the coaches, to go out and recruit,” Jordan said. “At Colgate, it was different from Drexel being so far, but I think here it will also be different because we are way closer to New York and Philadelphia, and Jersey’s right there.”

Jordan now has to face the task of replacing Lafayette basketball coach Fran O’Hanlon. Coaching for 27 years, O’Hanlon’s Patriot League record for games coached will be hard to replace on College Hill, but Coach Jordan is poised to do so.

“I think Coach O is an outstanding coach who has done a lot not just for Lafayette but for the game of basketball, and I learned a lot from him,” Jordan said. “But we are not the same, we are very different and I’m going to leave my fingerprint on how we do things around here and I’m looking forward to the challenge.”