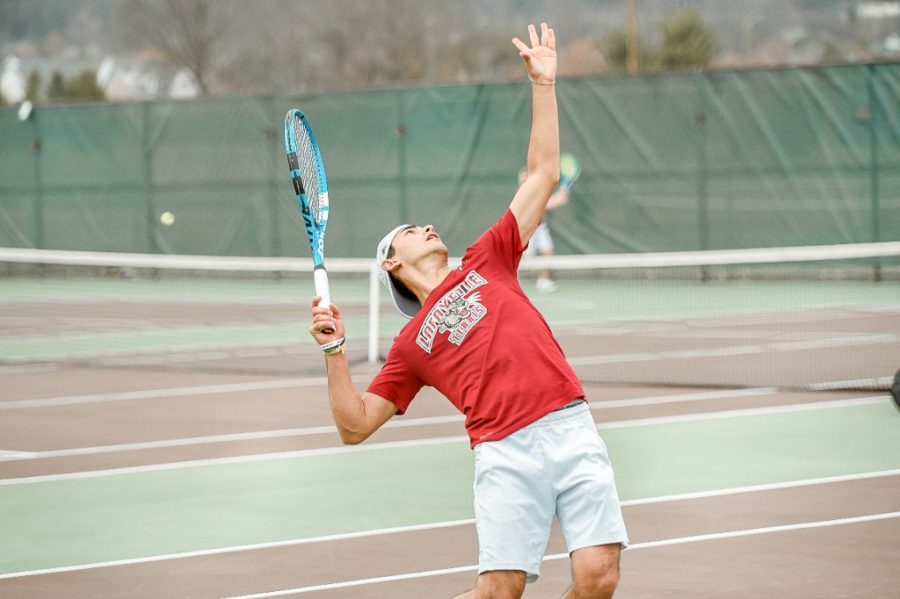 Arman Ganchi '25 mid-serve during his court one victory over Loyola. This domination led to his receiving the Patriot League Player of the Week. (Photo Courtesy of Goleopards.com)

“It’s a great feeling,” Ganchi said. “This award and the success that led to it really made my hard work and training feel worth it. It has also motivated me to work even harder.”

Ganchi stepped onto the court one role halfway through the season and he has quickly grown into the role, establishing himself as a dominant force across the course of the Patriot League.

“Starting off as a freshman, it gets a little tough getting used to and he’s really settled in and gained more confidence,” Ganchi’s doubles partner sophomore Davis Esslinger said. “He’s only going to get better from here.”

The men’s tennis team has struggled to get wins up to this point, but Ganchi has held firm. He has won six out of his last seven singles matches on court one, showcasing that he is the best player whenever he steps on the court.

“As he’s gained confidence, he’s gotten louder and more supportive,” Esslinger said. “He has really settled into the team atmosphere, and I think that has really been reflected both on and off the court.”

“A great deal of my success can be attributed to my team. Being a freshman, they have made me feel really welcome, and every single one of my teammates are encouraging and fun people to be around,” Ganchi said. “We have a really great team chemistry, and it helps me stay relaxed and motivated so I can play my best.”

Ganchi, a prospective computer science major from Wayne, N.J., expressed that he was drawn to Lafayette’s mixture of strong academics and athletics. He saw the college as an opportunity to compete at the top level as a Division I athlete while also receiving a top-tier education.

The team now looks to the final weeks of the season to establish momentum before Patriot League Championships at the end of the month. The team is currently positioned to be the last seed in the tournament.

“Going forward, we will continue to train hard and look to close out the season on a high note,” Ganchi said. “We’ve improved so much since the season started, and with the Patriot League tournament coming up in a few weeks, I think we’ll have some great matches and really see our hard work pay off.”

The team will take on Fordham tomorrow at 2 p.m. and the Naval Academy on Sunday at 8 a.m.