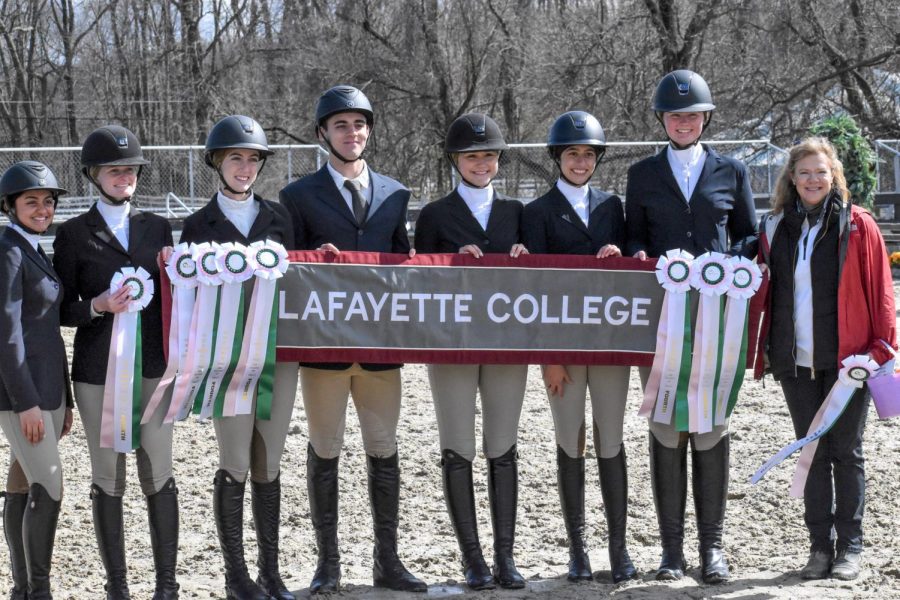 “Since I’ve been on the team freshman year, we haven’t qualified for regions or zones,” junior Lindsay Strachan said. “This is the first year I’ve experienced being able to go, and I think it’s because the team got a lot bigger this year and we have a lot of good riders.”

There are five regions in IHSA Zone 3, and the High Point Teams of each region in Zone 3 competed for the title of Zone 3 Champion College. Lafayette competed alongside Penn State University, Centenary University, Delaware Valley University and the University of Delaware.

Strachan admitted she was nervous going into the competition because Centenary is known for its equestrian program.

“[Centenary] won of course, but being able to compete against such a high-level school and come in fourth was amazing,” Strachan said.

Penn State finished second in the competition. As the top two teams, Centenary and Penn moved on to IHSA Team nationals.

Each school competing for the Zone 3 Team Finals put forth a roster of eight riders, with one in each IHSA division.

Sophomore Grace McEneaney placed fourth in the class seven open flat. Due to her performance at regionals, McEneaney also individually qualified for IHSA class eight-open flat and placed seventh in her division as an individual.

“I think that we honestly did the best we could. Lafayette was kind of the underdogs in this horse show because we haven’t made it in years and these other schools compete in it all the time,” Strachan said. “Even just the fact that we got so far was incredible.”

Three freshmen had impressive performances this past weekend, with Daisy Wheeler placing second in the class three limit flat, Connor Port placing fifth in the class two novice and Shreya Suresh placing third in the class one introductory division.

“We’re always looking for more new members, freshmen or any other class. We have some prospective Lafayette students who are interested,” Strachan said. “We have some seniors graduating, but we’re still gonna have a big team. We will miss them a lot.”

Emma Wilson ’21 compete in the Alumni Division for Lafayette on Saturday as well.

“Competing in the alumni division is so fun. Everyone is super supportive of each other,” Wilson wrote in an email. “IHSA is so accessible compared to other equestrian competitions because you don’t need to own a horse to participate. This is a big reason why I stayed involved. I also have loved seeing the Lafayette team grow over the course of the season.”

Wilson placed second in her flat class and qualified for nationals as an individual.

“I’m super excited about going to nationals. Freshman year I volunteered at nationals, but I’ve never competed there,” Wilson wrote. “The horses should be very nice and I’m looking forward to watching the other competitors as well.”

As a recent alum of the program, Wilson was very impressed with Lafayette’s performance at zones.

“Zone 3 is a very competitive zone full of great riders. Everyone on Lafayette’s team really held their own against some stiff competition and I was so proud to see them walk away with fourth place,” Wilson wrote.

Strachan explained that their success this season can be attributed to the fact that the team is welcoming and warm to all of its members, whether or not they are heavily involved.

“I think the reason we’re so close is because we have so many early, cold mornings and spend a lot of time together,” Strachan said. “Everyone is just always so helpful. It’s really a healthy and close-knit dynamic that’s ultimately very supportive.”