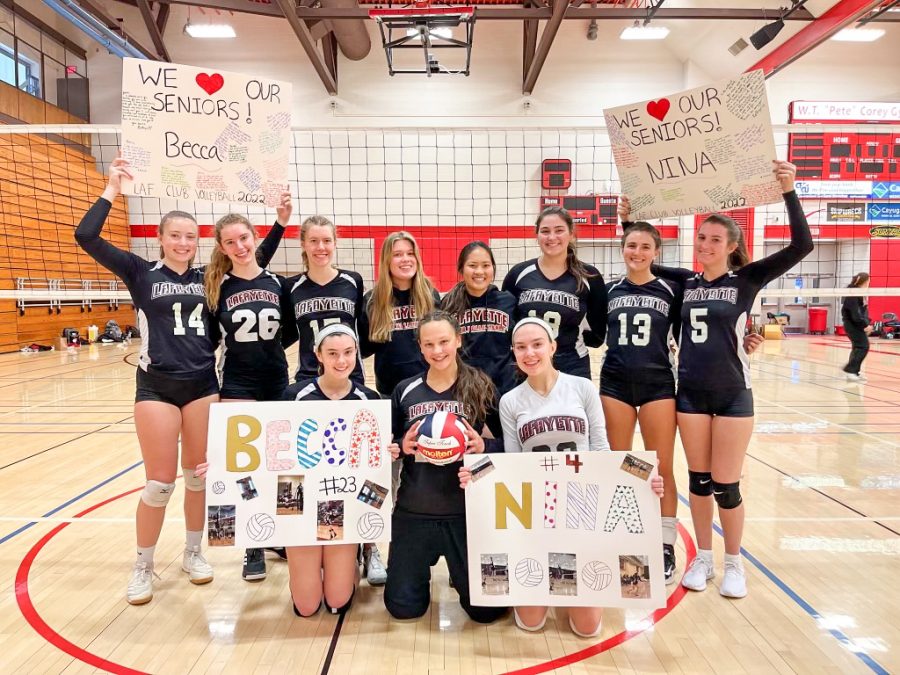 The club volleyball celebrates their seniors' last competition at regionals this past weekend. (Photo courtesy of Dolce Whitwell '23)

Club women’s volleyball traveled to SUNY Cortland this past weekend for regionals where they played five matches, ultimately coming in third place and placing the team third in the league for the season.

“During practice, we really tried to get as much motivation and excitement as possible. For everyone except the seniors, this was the first regionals that we’ve ever gotten to go to because of Covid,” junior outside hitter and the club’s future president, Dolce Whitwell said.

The tournament started off with pool play, where Lafayette beat Central Connecticut State University (CCSU), Cortland’s B team and Cornell’s B team.

Moving into playoffs, the Leopards were victorious against Rochester in the quarterfinals.

“I think in our first playoff match, we had the most energy that we had throughout the day,” Whitwell said. “It was kind of like ‘Okay, this is the moment. You win or you go home.'”

Lafayette lost to Columbia in the semifinals, who went on to win the tournament.

“In terms of competition that we were playing, our last match was definitely our most difficult match,” Whitwell said. “They were a really good team, but I think we did the best that we could and still played with that high energy.”

In a league of about 50 teams, Lafayette’s performance this season placed them in third. Regionals built on an already successful season, consistently ranking highly in tournaments this spring.

“We would have loved to make it to that championship match, but looking back on it we’re very happy to be third in the region, because only eleven teams even qualified for this and there’s plenty of other teams in our division,” Whitwell said.

This tournament was an emotional one for the team as it was the last time they’d be competing with their seniors, outside hitter Becca Abel and middle and libero Nina Curko.

“They’ve become such good friends on and off the court for me. They’re not just teammates, they’re both two people I heavily rely on,” Whitwell said.

Whitwell explained that to show their appreciation for Abel and Curko, the underclassmen celebrated their last tournament by making posters with sweet message for the seniors, creating picture fames of photos taken over the past three years and baked a cake that read ‘We love our seniors’.

The team recently announced its new executive board for the fall. Whitwell will be president, and joining her on the board will be right-side hitter Kathryn Wright ’25 as treasurer, right-side hitter Julia Nahm ’24 as secretary and defensive specialist Anna Paulsen ’24 as social media chair.

Whitwell explained that the board’s goal will be to keep as many girls involved with the team as possible and continue to grow from there.

“Just keeping that same spirit, dedication and the girls who love volleyball and want to keep playing it would be our goal moving forward next year,” Whitwell said. “We welcome any new freshmen who are interested in joining the team.”