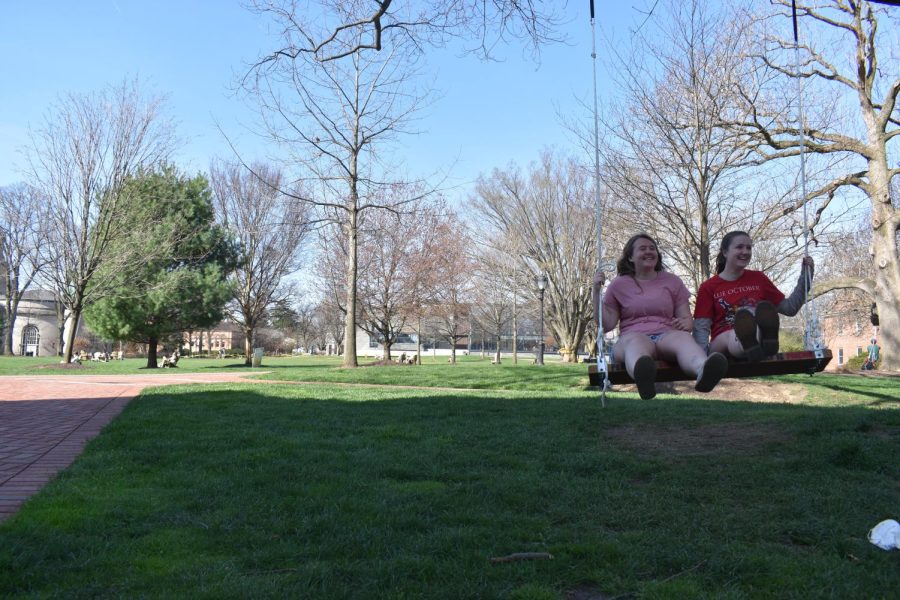 The swings recently placed around campus can hold 2,000 pounds. (Photo by Deanna Hanchuk '22)

The process of getting swings up all over campus has its highs and lows. Over the past few weeks, Kristen Steudel ’22 and Remy Oktay ’24 channeled their passions for swinging into a campus-wide initiative for placing twelve swings in various locations around campus.

Steudel’s love of the so-called “philosopher’s seats” is so great that she wrote her college application about them.

“Seeing other college campuses, I’ve only seen schools with maybe one swing,” Steudel said. “But to have twelve swings of great quality is incredible. And it’s literally a dream come true that people love them so much.”

Steudel and Oktay became friends three years ago, in part due to their shared love of swings. They built their first swing for a Dyer Center photo shoot last fall that later inspired them to pursue the swing project.

Oktay already possessed a love of the outdoors and has been climbing trees since he was a child. Later in life, he said he was told that climbing a tree is a child’s activity. This inspired him to “challenge societal norms of aging.”

“There are [societal standards] surrounding what movements and actions are okay for children versus adults like crawling, running, or swinging or bouncing on a trampoline, stuff like that,” Oktay said. “We can enjoy the fun of igniting our inner child and being kids again, and running and playing.”

Steudel and Oktay invested approximately 150 hours this semester devising a plan to install swings around campus. These hours have been spent partnering with faculty, communicating with Oktay’s Creative and Performing Arts Scholars Program (CaPA) advisor and the Student Government Sustainability Committee, sourcing affordable materials, designing prototypes and inviting 45 other student organizations to participate in decorating the swing seats.

CaPA, according to the Lafayette Arts website, financially supports students who “use the arts as a vehicle for igniting dialogue on Lafayette’s campus.”

Oktay and Steudel also spent time running around campus locating the perfect places for the swings to hang. They then figured out how to design a swing that would be sustainable, could be installed from the ground and would protect the trees by not wearing away their bark over time.

Steudel explained that they identified 68 trees that could hold swings before asking arborists and representatives from the swing industry how they should decide which tree branches are strong enough to hold the swings.

Oktay learned some of the “tricks of the trade” on swing-hanging from a New York arborist. According to Oktay, a lead shot put ball is attached to a throw line which is then launched over a tree branch. For this step of the process, Oktay and Steudel confided in John Bloss ‘22, a pitcher for the baseball team.

“He helped us get some precision,” Oktay said.

Safety was a priority for the pair, as evidenced by the number of arborists consulted and the in-depth tests conducted on tree branches. When they were informed that two swings–those near Skillman Library and behind Pardee Hall–were hung on trees notorious for having branches fall during severe wind, Stuedel and Oktay promptly removed them.

“[The administration] said the branches we had the swing set up on looked very sturdy and they didn’t have a problem with those. It was just getting a lot of people hanging out and spending time in the area around those trees because it may increase the likelihood or the probability that, should one of those trees drop another branch, that it would hurt somebody,” Oktay said.

The swings will be relocated to the quad, including a second swing on a tree near the Kirby House.

Steudel and Oktay hope that the swings will be kept permanently on campus but noted that they may take them down at the end of the semester. Oktay says this is because he will not be able to check their safety during the summer.

“I’m planning on sending out a petition and a survey both to capture people’s reactions and other experiences that people have had to the swings,” Oktay said. “Also, I hope to just get signatures to make them permanent so that hopefully the school can get behind that.”

“I think for the way the students have responded, and the way the community has responded, I am hopeful that they will become permanent,” Steudel added.