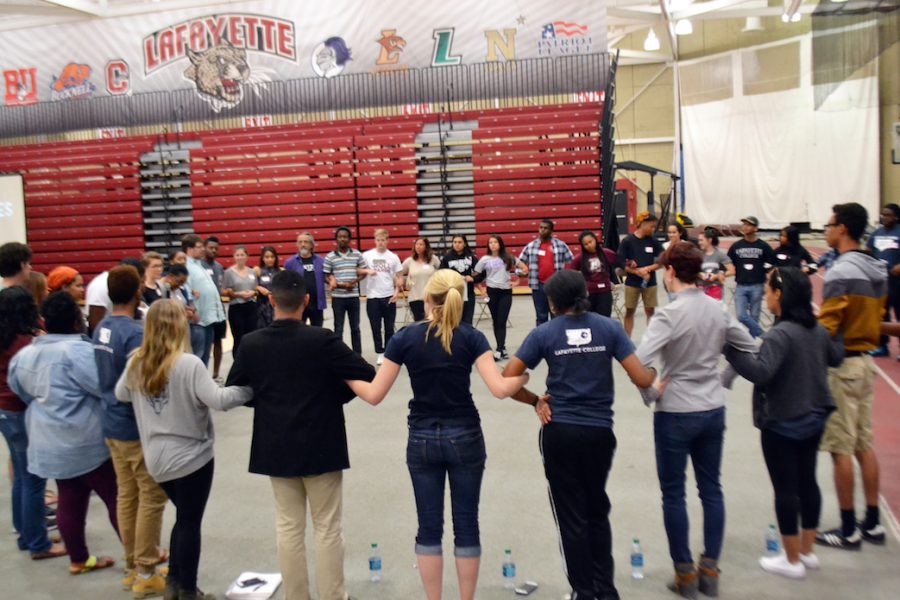 Coming from a lower class neighborhood in Brooklyn to Lafayette’s predominately white campus, Mikai Harris ‘19 knew her life would be different. She said she expected prejudices, a difficult time in communicating with her white counterparts and hardship in finding a group she in which she belonged.

What Harris did not expect to experience was the Posse Foundation, an organization intent on creating a dialogue surrounding some of the most controversial issues today, including race, class and diversity.

On Sunday, Harris, who is not a Posse scholar herself, attended an on-campus follow-up to the annual Posse Plus Retreat (PPR) that occurred in February. This retreat, which was in Kirby Sports Center, was the first ever on-campus Posse retreat at Lafayette.

At the retreat, Director of Strategic Projects for the Posse Foundation’s National Staff Brett Murphy said that it was also the first time that any Posse organization has ever held a follow-up retreat on a college campus.

Brianna Braswell ’16, who organized the event, said the intention was to bring the conversation that took place at the off-campus retreat back to Lafayette. Both PPR’s centered around one topic: speech and language in a diverse society.

“There are a lot of people on this campus who have never experienced a Posse retreat and so the idea behind it was to say this conversation shouldn’t be limited to who can go for that weekend,” Braswell said. “It should be open to anyone on campus who wants to engage in the conversation.”

Braswell said the decrease in numbers could be attributed to the short notice of the event and the upcoming exams week. Typically, organizing for the off-campus PPR begins the summer before the retreat. Braswell had less than two months.

Despite the drop in attendance, Braswell was not discouraged about the event’s effectiveness.

“It’s a new idea, so it’s not going to be the biggest and best of all time,” she said. “I don’t even think it matters how many people show up as long as the people that do show up are engaged.”

“To me, even if one person gets something out of it, that’s what the purpose [of the retreat is],” she added.

Originally, Braswell said her idea for an on-campus retreat was turned down by the National Posse Foundation. But a few days later, the founder and head of the Posse foundation called her and gave her the go ahead to organize the retreat.

Those in attendance used the retreat as a safe, open space to talk about issues in their lives related to terms such as micro-aggressions and coded language.

After the group played warm-up games in a large circle, a discussion began about the importance

of language in society. Attendees then placed sticky notes on cards with different race, religious and class labels and answered questions about their identities by standing next to the different labels.

One of the reasons the retreat was useful was because it helped take abstract discussions about micro-aggressions and apply it to daily life on a college campus, said President Alison Byerly, who was in attendance.

For Byerly, these conversations helped her see how much students want to be heard.

“What was helpful in this was hearing directly from students how visceral their sense of not being heard properly can be,” she said.

Harris said that the retreat is important for educating everyone about the terms micro-aggressions and coded language.

“People like me know what these things are because we experience them on a daily basis, but other people don’t know,” she said.

Dean of Advising &amp; Co-Curricular Programs and Posse liaison Erica D’Agostino said she hopes to have a similar retreat occur next year, this time in conjunction with the summer reading book, “Between the World and Me,” by Ta-Nehisi Coates.