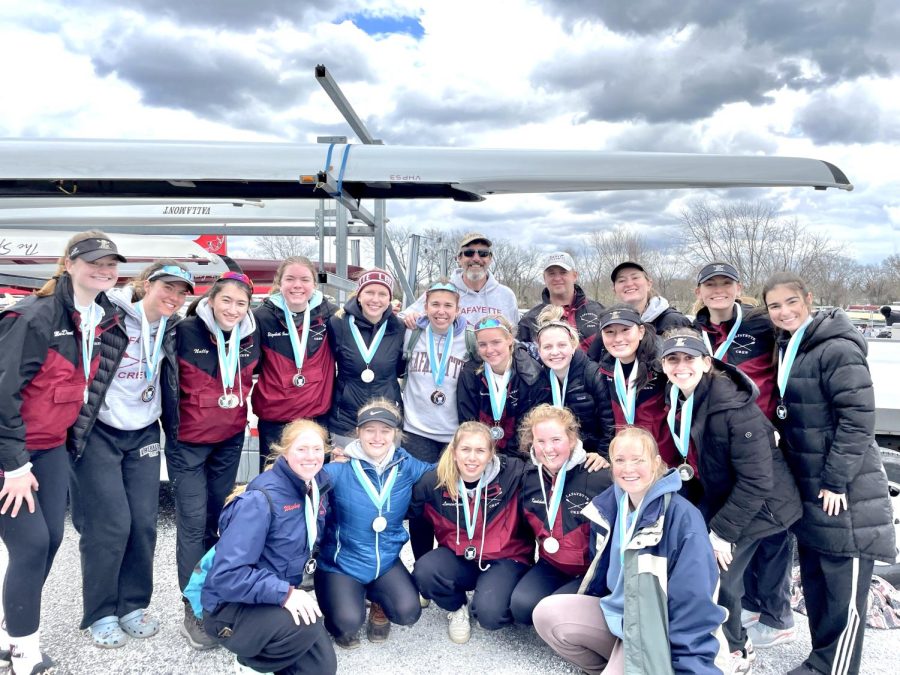 The crew team hit the road this weekend, competing in the Knecht Cup Regatta in Cherry Hill, N.J. Over 50 other club and varsity programs were also present, racing on the Cooper River from all over the United States.

“Conditions were rough and the competition stiff, but our crews battled through and came away with good racing experience and renewed motivation,” Assistant Coach Derek Richmond wrote in an email.

The Leopards were able to advance five boats to the Grand Finals on Sunday, with three other boats automatically qualifying for the Sunday races due to the lack of heats for those events.

“It was exciting to be there,” sophomore Rose Broderick said. “Competing against a lot of teams gives us the opportunity to push ourselves in a way that we can’t when the competition is more limited.”

The women’s varsity four fared just as well, finishing ahead of Penn State by more than 15 seconds. The varsity four team raced in the DI/II club race with schools from as far away as California. The women’s third varsity four competed in the DIII events and placed second behind Ithaca college.

“The success of our coaching staff and past Lafayette crews has given us a winning reputation to uphold in spite of these challenges,” Broderick said.

Finally, the women’s team finished their complete domination of the water with the freshman four finishing in a close second behind the University of New Hampshire’s varsity team.

“For the freshman crews especially, it was important that they get a taste of what it’s like to compete against some of the best crews in the country,” Richmond wrote.

After racing last week for the first time at the Murphy Cup Regatta and dominating against Division I programs like Georgetown, Drexel, West Virginia and Rutgers, Lafayette took on these schools again and again achieved success.

“Big-name schools can be intimidating because they have access to funding and other resources that we don’t as a club team,” Broderick said. “This makes racing and medaling against Division I programs even more rewarding—it’s a sign of our strength and dedication to the sport.”

The men’s side also earned a spot in the Sunday Grand Finals, with the varsity four placing fifth behind perennial powerhouse programs of LaSalle, Mercyhurst, George Mason and MIT. The men’s novice four also took home a win in the Petite Final in their first race of the season.

Looking a few weeks forward, the crew team will be attending the Dad Vail Regatta in Philadelphia, P.A.