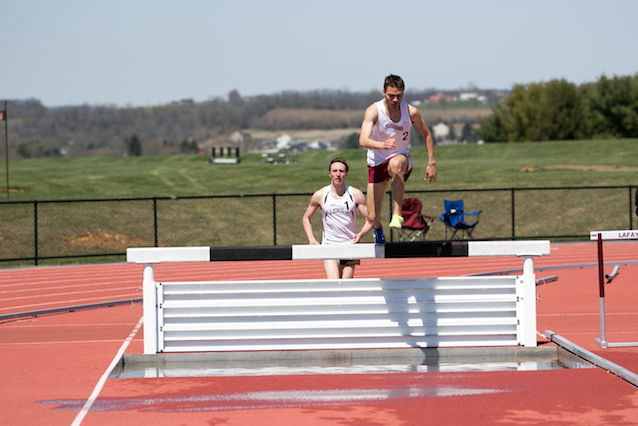 The men’s and women’s track &amp; field teams did not leave the Larry Ellis Invitational this past weekend without leaving their marks in the Lafayette record books.

Day, also a senior, was able to beat his personal best by over five seconds in his race, the steeplechase. With a time of 9:15.35, Day was able to move from seventh to fourth in the Lafayette record books. His time also qualified him for the IC4A Outdoor Track Field Championships at Princeton in mid-May. He finished in 20 th place at the meet.

“I have worked hard towards improving my personal best, and it’s always satisfying to see hard work pay off, especially when moving up the list of Lafayette greats,” Day said. “It’s a big breakthrough for me.”

Corcoran, a junior, did not move up in the rankings but he was able to increase his personal record in the hammer throw. Already having the fourth-furthest throw in Lafayette history, Corcoran had a toss of 182’1”, which was roughly two feet more than his previous best.

Broholm, a junior, was in a similar situation as Corcoran. Her time of 1:03.94 in the 400-meter hurdles bested her previous time by 0.04, but she still remained seventh all-time in the Lafayette record books. Her performance was good enough for her to finish in 19 th place for the meet.

As the season winds down with only a week until the Patriot League Championships, the teams will use this weekend to tune-up before the big meet. Racers from the men’s and women’s 4×400 and 4×100 teams will compete in the Penn Relays, while the others will go to Bethlehem to compete in the Lehigh Games. Both events will be the last before the championship begins on May 6.

“The team is looking forward to the Patriot League Championships,” Day said. “We have improved as a group throughout the year and have focused on developing the mindset necessary to make statements in a variety of events in Lewisburg.”

There, Day said, the team hopes to make a statement.

“I am pleased but not satisfied with both my individual and our team performances so far this season,” he said. “We’ve had some wonderful moments such as winning the Laf-Lehigh dual meet and I’ve been successful in my individual events. However, the goal has always been to perform at the highest caliber at the championship meets at the end of the season. We have unfinished business, and we are ready to roll.”