Preview: ‘Black Comedy’ to cause comedic chaos in the dark 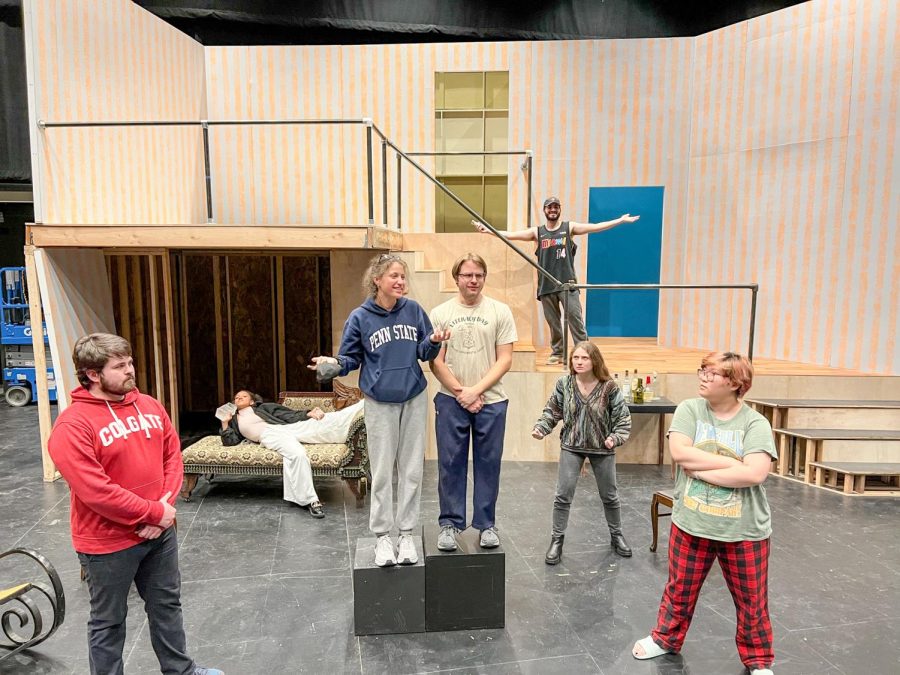 Darkness will become light in an upcoming production of “Black Comedy” by Peter Shaffer.

The play, directed by CJ Silverman ’22 and stage managed by Deniz Ozbay ’22, will run from April 28 to April 30 in the Weiss Theater in Buck Hall.

“Black Comedy” revolves around a man named Brindsley, who is preparing his home with his fiancée Carol as they expect a visit from wealthy art collector George Bamberger. In order to impress both the art collector and Carol’s visiting father, the couple decides to steal expensive antiques from their neighbor. However, just as everything appears to be going as planned, the power goes out.

In the complete darkness, which is transposed as light in the production, the characters cannot see a thing. As their neighbor returns from a business trip, Carol’s father also arrives, along with Brindsley’s former mistress. Chaos ensues as Brindsley tries to save the night.

Harvest Gil ’25, who plays Brindsley’s mistress Clea, has been enjoying the intimate production and the cast that makes up “Black Comedy.” According to Gil, audience members are in for an exciting time.

“​​They should expect to always be on their feet eager for what mishap is to occur next and be prepared for some very different British accents,” Gil wrote in an email.

For some members of the cast, “Black Comedy” is their first-ever acting role. Charlie Harper ’22, who plays Carol’s father Colonel Melkett, will take the stage for the first time to round out his time at Lafayette.

“As [Silverman] was working on picking a show for his senior project during the end of our junior year, I made a ‘blood oath’ to him that if he needed people to act, I would do my first and only stage role with Lafayette College Theater for his performance,” Harper said.

But for students like Lucy Kade ’22, who plays Carol, “Black Comedy” will be the last of many college theater performances.

“I’m so glad I’m ending my performing career in a show alongside a cast and crew made up of my friends. I met Charlie, CJ and Deniz my freshman year all through theater and we’ve been friends ever since, and it’s been so cool to have talented freshmen in the cast as well,” Kade said.

Silverman said that audiences should expect “American people trying to do British accents” and “a whole lot of physical and verbal comedy, which will hopefully be funny to people.”

“Everyone has put in more than their back’s worth of effort into making this show as amazing as it can possibly be,” Harper said.

Those who are interested in seeing “Black Comedy” can purchase tickets on the ticket office website or at the box office in the Williams Arts Center. Tickets cost $3 for students, $5 for faculty and staff and $10 for the general public.