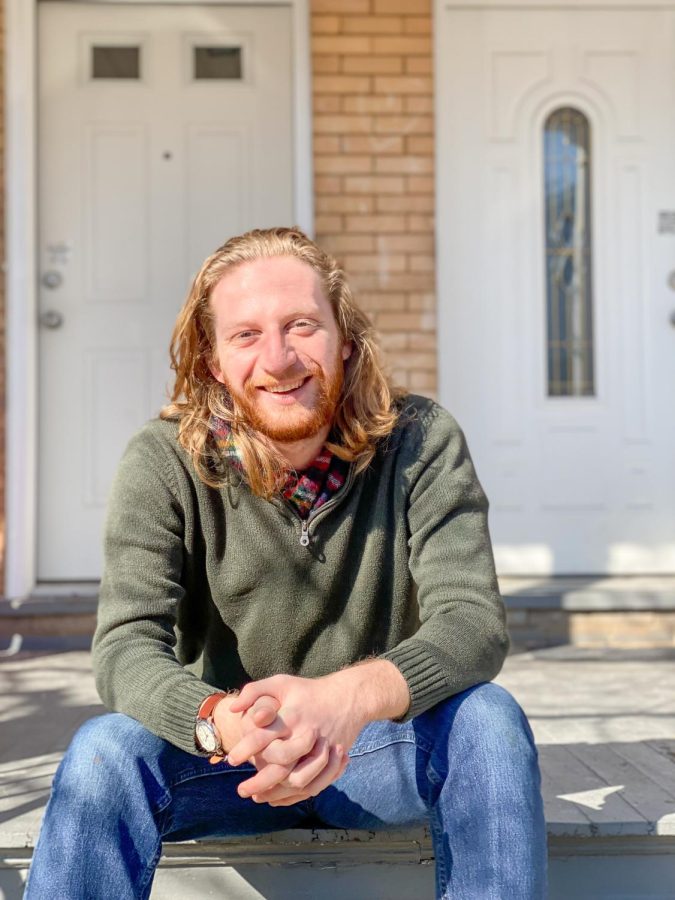 Matthew Gustafson ‘22 turned a late-night drive to Lafayette into an award-winning poem.

Gustafson is the winner of the 2022 H. MacKnight Black Competition in Poetry, a contest for senior poets at Lafayette. The prize is named after H. MacKnight Black, class of 1916. Black was a nationally renowned poet in the early 20th century before his passing in 1931.

This year’s competition was judged by Donika Kelly, acclaimed author of “The Renunciations” (2021) and “Bestiary” (2016).

Gustafson’s interest in poetry flourished after he took Introduction to Creative Writing at the beginning of his sophomore year. Soon, he was taking any class he could where he interacted with poetry, from workshops to an environmental writing course.

Inspiration for his poem “Driving Back Late” struck when Gustafson was driving back to Lafayette after spring break. During the drive, he thought he saw a person dancing in the headlights of oncoming cars. From there, the idea evolved into something more.

“For me, it’s a poem about grief and memory—seeing people and things in little corners as you live your life, or little pieces of heaven lying around,” he said.

“Driving Back Late” runs less than thirty words and features no punctuation aside from an ending period. Gustafson took inspiration from the Black Mountain poets, a group of poets from the 1940s and 1950s who wrote in short, open-form poetry based on patterns of speech and breath.

“The effect is that the reader is propelled through the poem, not knowing where they’re going,” Gustafson said. “And in that way, the ending becomes much more satisfying.”

“I think of it like a water park,” he continued. “There are body slides that are enclosed and you’re in the dark, and the slide is whipping you around corners and you don’t know where you’re going. Then, suddenly, you see a little bit of light, and you’re just dropped out into the water.”

To Gustafson, short poetry has a particular allure.

“When I’m flipping through a book of poetry, I’m looking for the short poems. It’s something about short poems that catch the eye more, and I think they linger in my memory more. So I knew I wanted this to be a short poem to get right to the point,” he said.

When writing the poem, Gustafson began with the ending lines.

“I knew the ending of this poem first—I knew I wanted it to be ‘the yellow headlights of oncoming cars.’ I just liked the way it sounded, and I like the mixed emotions it leaves you with: relaxed, sort of relief and sort of fearful,” he explained. “So I knew I wanted to get there. It was a question of, ‘How do I get there?’”

Gustafson’s final goal was to bridge the gap between the way a poem sounds and the way it is read.

“I think that poetry when spoken is just as important as poetry on the page,” he said. “So making sure the words flow and the sounds blend together was something that was particularly important to me.”

Gustafson recited “Driving Back Late” on Tuesday at the H. MacKnight Black poetry reading. Milena Berestko ’22 also recited her poem “Encapsulated in Flesh,” for which she received an honorable mention.

Below is Gustafson’s award-winning poem: