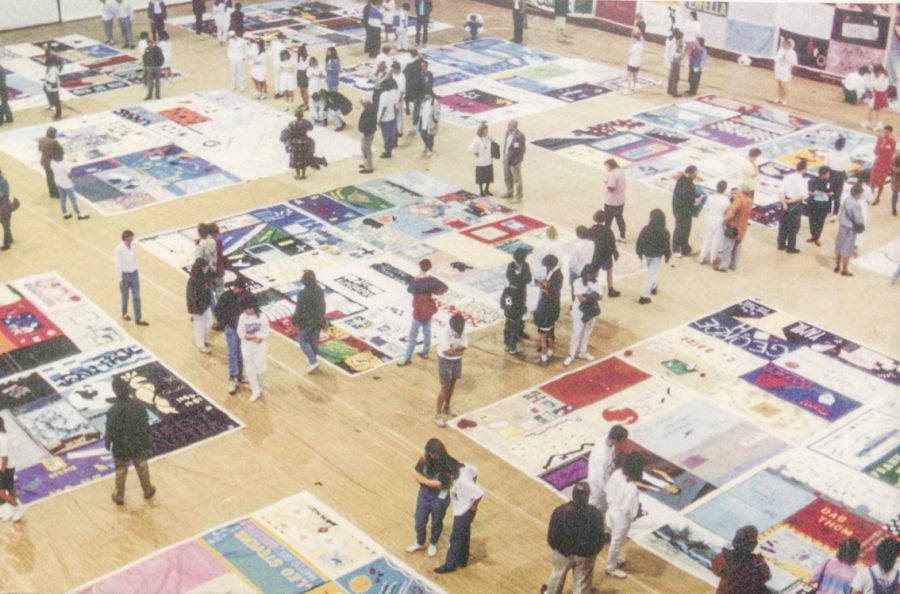 Students viewing the AIDS Memorial Quilt at Kirby Field House when it first came to Lafayette in 1992. (Photo courtesy of the Queer Archives Project)

Thirty years after its first visit to Lafayette, an important historical monument will be returning to campus.

Thanks to efforts by OUT Lafayette, visitors will be able to view the National AIDS Memorial Quilt in the Gendebein Room of Skillman Library from April 25 to April 29.

The AIDS Memorial Quilt was created in 1985 as a way to honor and commemorate those whose lives were lost to the AIDS epidemic. Gay rights activist Cleve Jones first envisioned the idea for the quilt. In 1987, Jones and his colleagues founded the NAMES Project Foundation, which oversaw the growth and development of the quilt.

Since its conception, sections of the quilt have traveled to universities and organizations nationwide. The quilt aims to educate people about AIDS and raise money to help fight the disease.

The opening ceremony for the quilt will take place on April 25 at 12:00 p.m. in the Gendebien Room. Reverend Goudy from the Metropolitan Community Church of the Lehigh Valley will be leading the event. The display will feature five squares of the quilt and archival documents from the Lafayette Queer Archives Project that highlight the history of queer life on campus.

“One of the things that no one wants to happen is to be forgotten. By bringing the quilt back, Lafayette is not forgetting,” Temple said in an interview with The Lafayette.

Meredith McGee ’23, vice president of OUT Lafayette, explained that the quilt’s return is an opportunity for reflection.

“It’s an event where both queer and allied students can reflect on the past and how much has changed since then. I think it’s so important to look at how far we’ve come and all the work that people have done before us,” McGee said. “I want us to honor our Lafayette queer history while also stepping into the future.”

McGee also stressed the relevance of the quilt’s return to Lafayette at this particular time in history.

“While the thirtieth anniversary is a huge date to celebrate, the coming of the quilt also coincides with a shift in the acceptance of queer and transgender individuals and further supports the need for education around LGBTQ+ issues,” McGee explained.

McGee cited recent legislation such as Florida’s “Don’t Say Gay” bill as evidence that there is still much work to be done for LGBTQ+ rights and education across the country.

“The quilt serves as a memory of our past but also a reminder of what needs to be done to secure our rights as Queer individuals,” McGee wrote in an email. “The quilt functions as a physical reminder of our Queer ancestors who fought for change, and serves to inspire us to continue that battle, especially in challenging times.”

Similarly, Temple highlighted the quilt’s timelessness and recognized the power of art to convey a deeply emotional message, even years after its creation.

“When people are oppressed and are suffering, one of the ways in which they try to alleviate that suffering is by creating beauty,” Temple said. “Artists always find a way to express the inexpressible, in this case, unspeakable grief…Finding a way to creatively say the unsayable, speak the unspeakable and say it in a way that elevates the human spirit and soothes the soul.”

Correction 4/27/2022: The headline for a previous version of this story specified the LGBTQ+ lives lost to AIDS. It has been updated to be more encompassing.