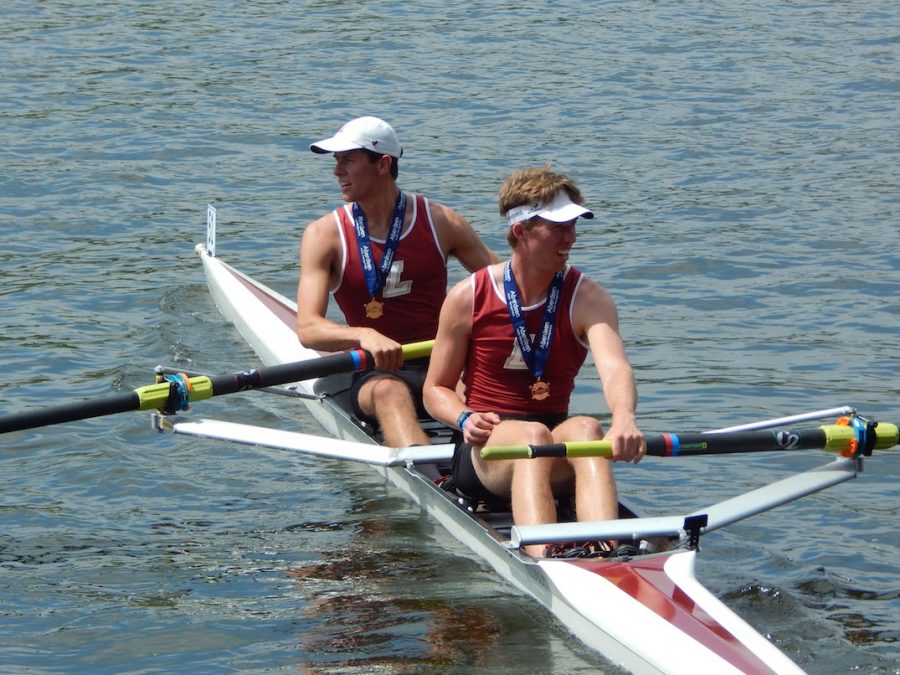 Katelyn Arnold: This past weekend you won gold at crew regionals. Talk about what that was like.

Ryan Coulson: Like Dave said, there were only two other boats in our race and we sort of, not to be braggadocious, but we kind of knew we were going to win before the race because we had already raced these crews before and we knew we were faster than they were. It’s kind of frustrating because the way Lafayette runs their program, we put two of our best rowers in the men’s pair, and so we have a fast men’s pair, but a lot of other programs prioritize other boats. So this last weekend, we were facing the fastest rowers from either program.

DH: So we know we have potential, but still making sure we’re being competitive in races that are less competitive. We have to make sure we’re on our game training wise.

KA: So, overall, what has this season been like?

RC: This weekend was sort of similar to what the season has been like on the whole. Last year we had some pretty stiff competition throughout the whole season and we were kind of challenged throughout the season, and we ended up placing third in our championship regatta. This season, coming off of a fairly successful season last year, we were expected to do well, but we’ve kind of been blowing away the competition this whole season, to be honest. I think it’s a combination of that we’re better than we were last season, and the competition is not as good as it was. It’s been validating to be winning every race, but at the same time it’s frustrating that we’re not getting challenged the way we wish we could be.

KA: What do you hope to achieve with the time you have remaining this year?

RC: Our goal is to win first place at the Dad Vail Regatta and hold up that trophy at the end. After Dad Vail, we’re going on our own, not with the rest of Lafayette Crew Team, but we just decided to go on our own to go to the ACRA (American Collegiate Rowing Association) National Championship Regatta and compete there. We’re hoping to be national champions in the pair by the end of the season.

KA: Have you achieved what you set out to achieve yet?

RC: So far, we’ve won every race. We pretty much have, but the goal is to win Dad Vail and ACRA. That’s going to be the gauge of if we had a successful season or not.

KA: So, David, coming towards the end of your college crew career, how are you feeling?

DH: Very fulfilled, even though the season isn’t over. This is now my third year racing in the pair and it’s kind of an uncommon boat, but since we have a smaller team, we prioritize it since we compete in it. Having increasingly done better each year, I think it’s pretty satisfying to have come as far as I have to be able to know I have a shot at being in a nationally ranked boat.

KA: What will you miss most about college crew?

DH: Having a team that depends on me and inadvertently keeps me in shape.

RC: Our dynamic is really good and that’s a big part of the reason that we’ve been so successful. I think we both do a really good job of not being too judgmental of each other. When you’re stuck in the same boat day in and day out, it’s pretty tough not to kind of snap every now and then. You really need to hold it back. I think we’ve both done a really good job of that and try to always have an optimistic outlook on things and refrain from judging each other in negative ways that would affect our boat speed.

DH: Just generally, matching up well takes a while. It’s been over a year now, so we’ve had a chance to match our strokes together and it’s still not perfect at all, but it’s gotten a lot better.

KA: Ryan, what will you miss most about David?

RC: I think I’m just going to miss his positive attitude, in addition to the fact that he makes boats go fast, and that we’re fast in the pair together. I can’t say for everyone on the team that they are able to stay as positive as Dave is all the time, and that’s something I’ll definitely miss.

KA: Ryan, what has your time as David’s partner taught you?

RC: He’s a motivated guy that’s out there to compete and win and get stuff done the right way.

KA: What was your favorite your memory as pair partners?

DH: Making jokes at the start line and at the finish with one of our best competitors. We had a very good relationship with them on the water.

RC: It’s funny because usually going up to the start line is usually a very gut-wrenching feeling for people and it’s very tense and nervous. But Dave and I have developed this habit of screwing around and joking with other boats when we get up there.

RC: Since this is a crew interview, I’ll say, “Burn it Down,” because that one always really does it for me in crew.

KA: Favorite sport other than crew?

DH: I like to watch basketball, but probably running.

DH: Don’t get too wrapped up in college and forget about the real world.

RC: You get out of something what you put into it, to put it simply.