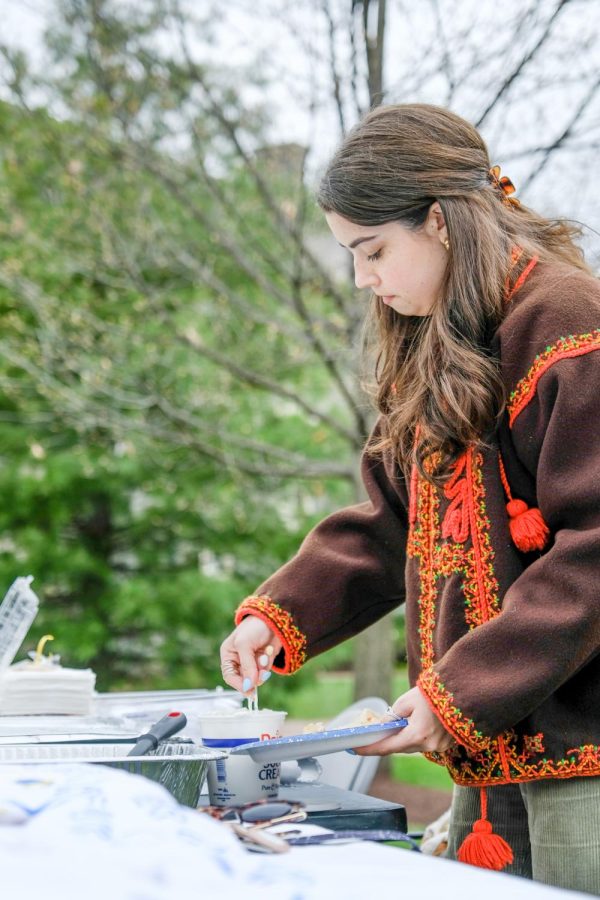 Deanna Hanchuk '22 prepares a plate of pierogies to serve at her fundraiser rally to raise funds for Ukraine.

Last Saturday, Deanna Hanchuk ’22, along with students representing the International Students Association (ISA) and Art Professor Pedro Barbeito’s Beginning Printmaking class, raised over $2,000 in cash and Venmo donations for Razom, an organization that donates tactical medical supplies and hospital gear and secures the safe transportation of said supplies to the military and citizens of Ukraine. Rally for Ukraine, as the fundraising event was called, was attended by dozens of students throughout the afternoon.

“It’s one thing to talk about helping those in Ukraine,” Hanchuk said. “But it’s another to actually do it. Our goal is to raise as much money as possible.”

While not born in Ukraine herself, Hanchuk has deep familial ties to the community; her grandparents are Ukrainian immigrants, and she was raised in a Ukrainian-American community in New Jersey. Hanchuk emphasized the closeness of the Ukrainian community, which according to her, attracted Ukrainians from outside of Lafayette to the rally.

“There was a young boy and his mom and his dad, both of the parents were Ukrainian, just sort of chatting with me. And I thought that was the coolest small world moment,” Hanchuk said.

“Watching the kid and his dad dance to Ukrainian music on the Quad was really sweet,” Hanchuk added.

“Food is a universal connector,” Hanchuk said. “Food is also something that people can bond about but also enjoy.”

Sarah Cohen ’24, a self-fashioned baker, made cookies for the event, while the pierogies were sourced from a Philipsburg Polish store called Krakus Deli. The leftover baked goods and t-shirts were sold on Tuesday, raising another $200.

Hanchuk said that her work raising funds for Ukrainian refugees is not over. While there may not be another fundraising event before the end of the semester, the Venmo account “United-with-Ukraine” will remain open for anyone who still wishes to donate to the cause.

“[The war] becomes something that’s just another thing. You become numb to the idea that there’s something crazy happening–a genocide occurring in Europe–because you see it every day,” Hanchuk said. “I had two main goals with having this ongoing event and fundraising over the past month: make money and [keep] Ukraine in people’s minds.”

Disclaimer: Deanna Hanchuk ’22 is a managing editor of The Lafayette and did not contribute writing or editing to this article.