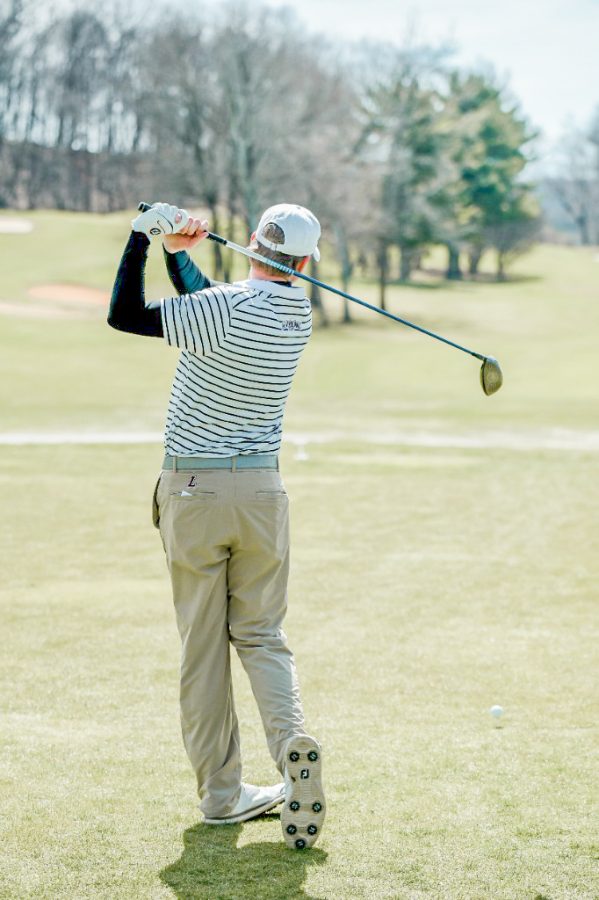 Lafayette golf ties Lehigh in their last preparation game before they host the Patriot League Championships. (Photo courtesy of Goleopards.com)

The Presidents’ Cup, a golf tounament held in Gladstone, N.J. concluded with the Leopards tying the Lehigh Mountain Hawks with a score of 8.5-8.5, which ultimately resulted in Lehigh retaining the title.

The Leopards worked on figuring out the pairings for the event throughout the week leading up to the President’s Cup.

“We got relatively familiar with our partners and really focused on preparing the best that we can,” freshman Michael Walsh said. “Obviously we really want to beat Lehigh, but we treated it as any other week.”

Walsh and Steiner got off to a hot start for the Leopards, which helped Lafayette cement their early lead against their rival.

“For better ball doubles I partnered up with [Steiner]. He’s a pretty close friend of mine and we knew each other’s games pretty well,” Walsh said. “We got off to a good start, we birdied the first three holes and didn’t really look back from there. Pounding Lehigh right out of the gates was pretty nice, and it helped us build a little confidence going into the next two sessions.”

The team of junior Augie Beers and freshman Raymond Dennehy and of freshman Sean Saw and senior Ryan Tall tied their matches, allowing the Leopards to take a 3-1 lead.

“Better ball was pretty key for us to get off to a good start,” Walsh said. “We had a two-point lead right out of the gates which was really big because it’s all about momentum in this event. Getting off to that good start was huge for the team going into the afternoon.”

The team round continued with an alternate shots double match. The team of Saw and freshman Michael Bell won their match, while the team of Walsh and Vanhaelst tied their match. The Mountain Hawks were still able to close the gap down to a score of 4.5-3.5.

The tournament concluded with an individual round of nine matches. The round started off with senior T.J. Repczynski and freshman Quint Dingledine winning their matches.

In the Ryder Cup style format, the Leopards needed nine points to win the title, but only halved four of the seven remaining matches. The Mountain Hawks won the individual round 5-4 and tied the score, thus retaining the winning title.

The final competition of the year for the Leopards will be the Patriot League Championship from April 29 to May 1.

“We have some influence in how we set up the golf course since we’re the host school. A lot of us sat down with our coach and talked about what we want to see and what we want to avoid,” Walsh said. “We’ve also been going out to see how the course is going to evolve over the course of the next week, because the conditions will change pretty rapidly.”

Lafayette will be hosting the tournament at the Steel Club in Hellertown, Pa.

“Just knowing how the ball will react when it hits the green will be key for us,” Walsh said. “We have a pretty good game plan in place so I think this will be a very good week for us.”