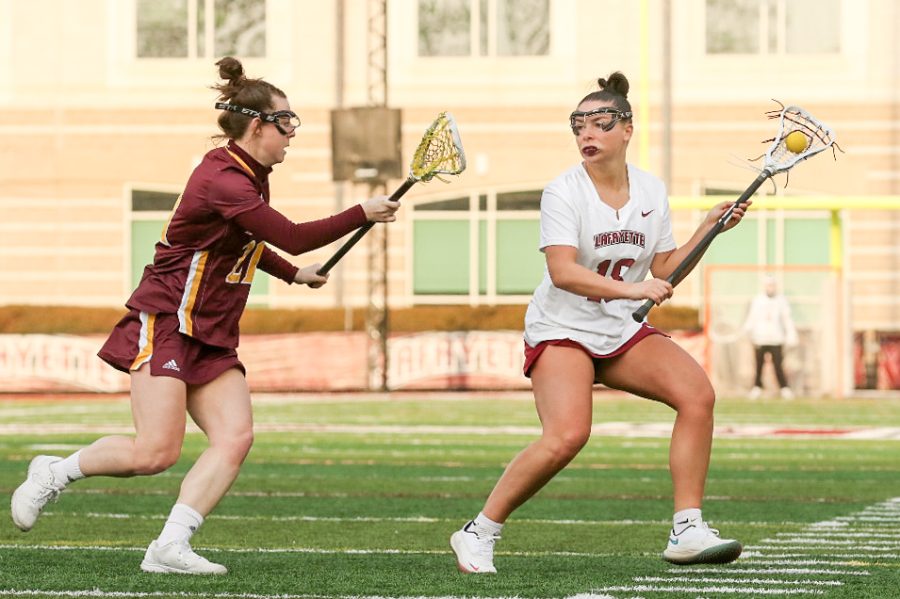 Senior attacker Olivia Cunningham challenges a defender in a recent rivalry game in which she notched her 100th career point. (Photo courtesy of GoLeopards)

In an unassisted second quarter goal, senior attacker Olivia Cunningham tallied her 100th point as a Leopard during last week’s rivalry game against Lehigh. Despite the milestone, the game ended with a final score of 16-6 in favor of the Mountain Hawks.

Head Coach Katie McConnell personally congratulated Cunningham at halftime, and the team had a small moment to celebrate the achievement before taking the field again.

“It felt especially great to hit one hundred against Lehigh because of all the hype that surrounds the rivalry,” Cunningham said. “Each play in that game means everything, so I just wanted to get one in the back of the net for my team.”

Before coming to Lafayette, the Villanova native scored 108 goals and added 70 assists at Episcopal Academy. She also competed for her high school’s soccer and track and field teams.

“This was definitely one of my goals coming into Division I lacrosse,” she said. “It’s something I achieved in high school, so I wanted to see if I could do it in college, too.”

However, Cunningham could have never foreseen just how unique her collegiate experience would turn out. After having participated in two seasons that were shortened by the pandemic, she has played in 42 games since 2019. Normally, athletes play about 70 games over the same four-year period.

“This is my last season at Lafayette, and it’s a bittersweet feeling. I don’t want it to be over quite yet, but I know the program is in good hands with the women on this team,” Cunningham said.

Cunningham has played in every single game of the past four years, starting in over 90% of them. Fourteen matches into the 2022 season and with one left in her career, she has averaged an impressive 2.43 points per game played.

“Our team is very young, so we’ve been using this season as a learning one. All these girls have so much potential, and I have no doubt that they’ll hold their heads high and come back next fall ready to get better,” Cunningham said.

Some of her career highlights include 10 shots in the game at Boston University on April 4, 2021 with eight of those being on target. In addition, she dished a career-high three assists on Feb. 29, 2020 at Iona.

In what she calls her favorite career memory, Cunningham had a stellar individual performance at Army on April 10th, 2021. That day, she recorded career highs in points and goals with seven, in addition to attempting eight shots.

Looking back on that game, Cunningham said, “The energy was electric, and we almost came back to win. It was just a great experience overall.”

As the curtain falls on a fantastic career at Lafayette, Cunningham offers valuable guidance to the next generation of athletes.

“My advice to young lacrosse players is to be resilient. There were games in my career where I didn’t put any stats on the board, and there were games where I had career highs,” Cunningham said. “Good days come with bad ones, and as long as you continue to follow your passion, the rest will fall into place.”