The grass is greener on the other side of the river: Recreational marijuana legalized in New Jersey 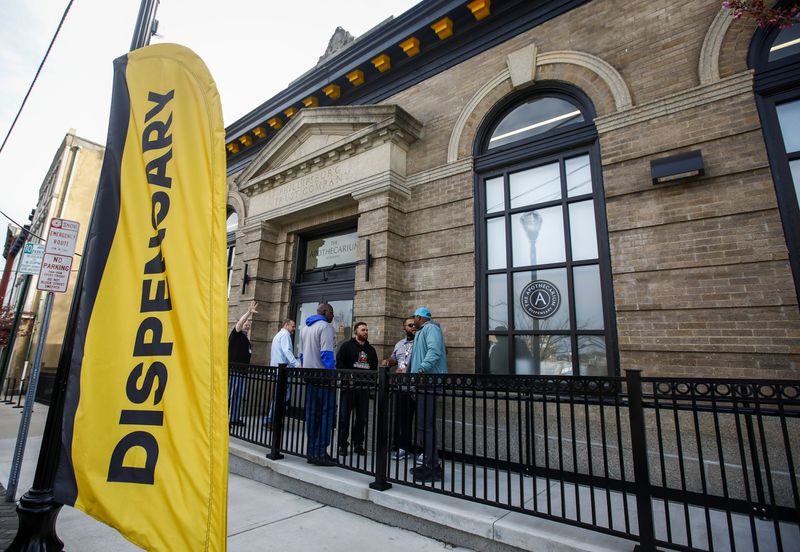 On April 21, the Cannabis Regulatory, Enforcement Assistance, and Marketplace Modernization Act went into effect in New Jersey, legalizing the sale of recreational marijuana in the state. The law was the culmination of years of effort by activists and politicians in the state.

“​​The legalization process moved slowly,” Government and Law Professor John Kincaid wrote in an email. “The legislature did not give Governor Phil Murphy a bill to sign until August 2021. The New Jersey Cannabis Regulatory Commission then developed regulations and authorized the first sales of legal recreational marijuana on April 21, 2022.”

Cities and towns have some discretion under the new law.

That shop is The Apothecarium, one of thirteen dispensaries in New Jersey that is now selling recreational marijuana. The Apothecarium is a three-minute drive from Lafayette’s campus.

Kincaid also wrote that there is now a new potential for substantial marijuana tourism.

To buy recreational marijuana in New Jersey, one has to be 21 years or older, according to Fortune.

Some Lafayette students are considering purchasing marijuana in New Jersey because of the new law. One anonymous student said that the new legislation will make it easier for them to get marijuana.

“I definitely think it will make getting weed on campus easier,” they said. “Last time I tried [to buy at a New Jersey dispensary] you needed a New Jersey Medical Card. If that isn’t the case and I can buy without a card, you know I will be.”

However, others are less interested, already having other ways of obtaining marijuana. Another anonymous student who sells marijuana on campus said that they look to the West Coast due to their cheaper prices.

“I buy directly from a grower in California which avoids some of the taxes there, so my rate is really good and just can’t be beat,” they said. “I probably wouldn’t buy from New Jersey dispensaries because my market price from California is insanely well priced, but I’d consider it.”

The dealer also said that they don’t think recreational marijuana use will increase because the prices will still be high.

“I don’t think weed use will go up much honestly. Access has never really been an issue on campus, if anything it’s pricing that is the barrier,” they said. “And when states legalize they start the rates really high, and then the prices start to dip. In five years or so maybe there will be a significant price drop in the neighboring area and it makes a difference.”

Even if some students are interested in purchasing from New Jersey, transporting marijuana across state lines is a violation of federal law, and the substance is still illegal under Pennsylvania state law as well as against Lafayette College policy.

“Although it’s more mainstream across the country and adult individuals now have access to legal recreational weed just across the river…it’s still a violation of college policy,” Director of Public Safety Jeff Troxell said.

Troxell acknowledged that there may be an increased use of marijuana on campus, saying “time will tell.”

However, he said that Public Safety does not plan on changing its current policies surrounding marijuana.

Prospects for the legalization of recreational marijuana in Pennsylvania are currently uncertain.

“Although a March 2022 Emerson College poll found 49% of Pennsylvania adults supporting legalized recreational marijuana, that percentage is not a groundswell of support,” Kincaid explained.

Yet, change in campus policies would additionally require federal legalization, as the Student Code of Conduct states that “the possession or use of illegal drugs as defined by federal, Pennsylvania, or Easton laws…is prohibited.”

As such, despite the legalization of recreational marijuana in New Jersey, college policy will likely remain unchanged for the foreseeable future.