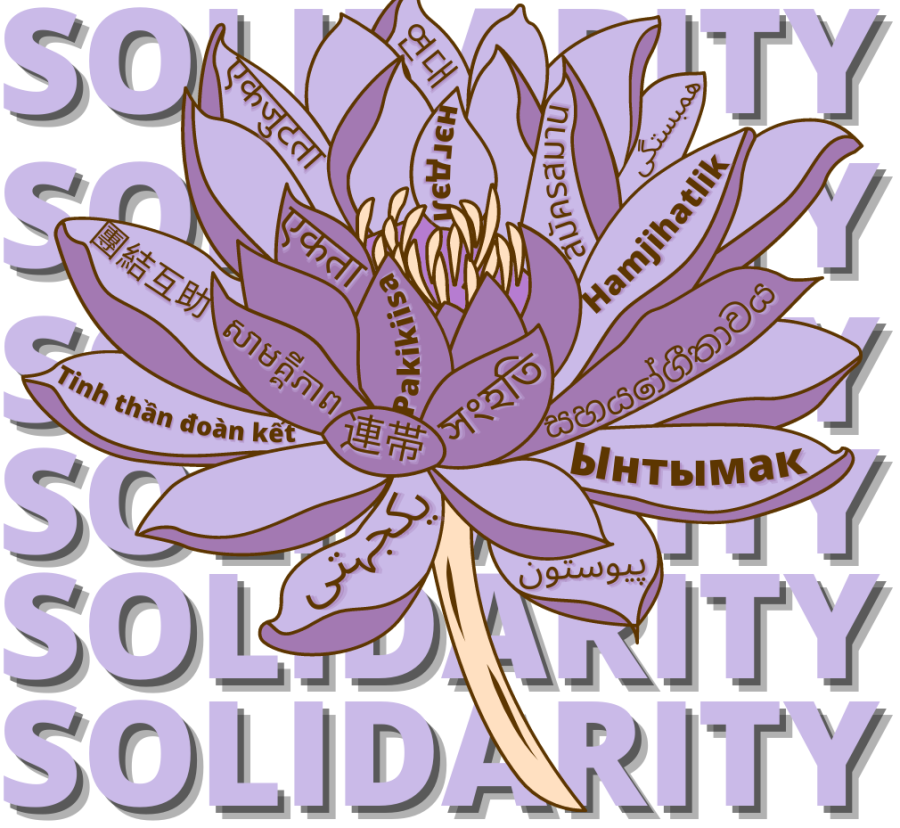 The lotus design, drawn by Kimberly Manalang '21, will be featured on stickers given out in goodie bags next week in Farinon. (Photo courtesy of Shirley Liu '23)

Throughout the month of May, the college will celebrate Lafayette’s second annual Asian American and Pacific Islander (AAPI) Heritage Month with a series of events celebrating the culture and contributions of AAPI people.

“As Lafayette is a PWI, the students here often live in an echo chamber where people of color are unseen or marginalized. In bringing AAPI awareness month to Lafayette annually, I hope to expose the Lafayette students to AAPI culture and broaden their horizons regarding differing identities,” Emma Chen ’24 wrote in an email.

According to Shirley Liu ’23, one of the event’s organizers, the month is also a chance for the Lafayette community to address the needs of Asian American students that often go unnoticed.

Along with Kimberly Manalang ’21, Liu organized Lafayette’s first AAPI Heritage Month last year. The initial events focused on the rise of hate crimes against the AAPI community that were happening last year, and they noticed that there were no celebrations surrounding the events of that month on our campus.

The theme of this year’s AAPI month is “Amplifying Voices,” which focuses on Asian joy, according to Chen.

“Many of the projects, events and discourse surrounding certain cultures and marginalized identities focus so heavily on their trauma. We are trying to really uplift the contributions of Asian Americans to our music, art, knowledge and society as a whole,” Chen wrote. “We want to show the positive impact of AAPI people on all of our lives and really give AAPI people the space to feel heard and acknowledged.”

Liu explained that their personal goal for this month is to continue the legacy that Manalang started.

“I want to make sure it isn’t just a one-time thing. I don’t want it to be like we only had these events last year because of this huge amount of violence against the AAPI community, and now that that violence has sort of decreased—it hasn’t stopped entirely, but it’s decreased—we don’t have to do AAPI programming anymore,” Liu said. “I just want to spread the message that just because we aren’t in a crisis situation doesn’t mean we don’t need this programming.”

The month will kick off with a distribution of goodie bags during the week of May 1. The bags will include Asian candies and snacks, a sticker designed last year, a fact sheet about the Asian diaspora focused on art and activism and a list of events happening in the month so people will know where and when to attend.

The first event will be a talk by keynote speaker Michelle Cho, who will discuss her research on K-pop and Korean film and media on May 3 at 5 p.m.

Lastly, there will be a movie screening on the quad on May 7 at 7 p.m. of the documentary “Writing With Fire,” which features the story of female journalists in India.

“We’re really focusing on this art and media production aspect this month, this year, as opposed to last year, which felt like a survival response—almost like, okay, all these attacks are happening, we have to do something about it. And now that we have some distance from the influx of violence against the AAPI community following the pandemic, we can focus on celebrating,” Liu explained.

“Not only will [the events] be incredibly enlightening and engaging, but they also will be tons of fun. Learning about other cultures is such a crucial aspect of college, and the planning committee has been working so hard in making these events ones that would appeal to the broad Lafayette community,” Chen wrote.

Liu sees the month as an opportunity for communities at Lafayette to show solidarity with all marginalized groups.