Marquis Anglers reel in new members and traditions this semester 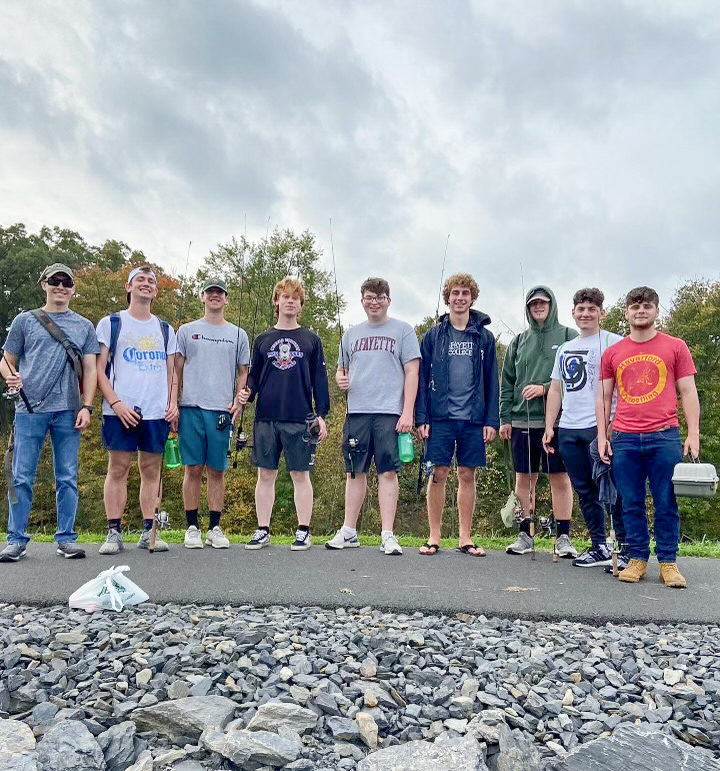 Lafayette’s fishing club, known as the Marquis Anglers, which was brought to campus in fall 2020, aims to provide an accessible hobby to those who have free time on the weekends.

The club has gone on three fishing trips so far this semester. Most trips occur at Bushkill Creek on Saturday mornings, but the group has also gone to Lake Minsi, which junior president Ethan Riehl said is about 40 minutes from campus.

“Going into opening day a couple of weeks ago, we were up all night just getting right into it,” Riehl said. “We got down to our fishing spot at probably 4:30 in the morning. It was a good time.”

The rest of the club’s executive board consists of senior captain Mike Greenwald and junior treasurer Chikomborero Dhire.

Riehl started up the club his sophomore year during Covid when the application to start new clubs on campus was sent out.

“I figured, I’m at home and I’ve got nothing going on. There’s not a fishing club on campus yet, so I’d love to start that up,” Riehl said. “It’s just a passion I have. I’ve fished my entire life.”

In high school, Riehl and his friend group would grab their fishing rods off their front porches and head out to the creek to fish after class.

“It’s just something that I wanted to bring to campus, you know, share my passion with other people who have similar interests in that regard,” he said.

Riehl said that the club does not focus on attendance, as its goal is more to provide students who have some free time with something fun and stress-free to do.

“It’s a relatively laid back club. People aren’t stressing about fitting it into their schedule, and it’s not something that people should have to spend a lot of money on to have fun,” Riehl said. “A lot of people, especially freshmen, bring their friends along. We love to get as many guys out as we can. If people can make it, great. If they can’t, it’s all right, we have plenty of trips.”

According to The Pennsylvania Fish and Boat Commission, “a valid Pennsylvania fishing license is required of persons age 16 and over to fish or angle for any species of fish.”

“We primarily do trout fishing, so you need a trout stamp for that,” Riehl said. The trout stamp is required despite the fact that the club catches and releases rather than harvesting the fish.

Riehl explained that normally for someone that lives out of state, it would be almost twice as much money to pay for the license. However, they offer student licenses for members of the club which cost the same amount as a Pennsylvania resident would pay.

Riehl said that he’s ready to pass the responsibilities of the club to someone else as they plan to hold executive board elections soon.

“I think it would be cool to have one big trip per semester. I think if we ask for a little bit more in our budget, that would be relatively easy to do,” he said.

Overall, he is proud that he created a stress-free club that provides an accessible activity for students.

“I’m really happy that we got the budget that we did, and that I was able to get a whole equipment for people to come and use as they please,” Riehl said. “Fishing can get pretty expensive pretty quickly, and I’m just really glad that we are in a position to make it a hobby that’s accessible to anybody who really wants to do it.”