Pam Brewer, former associate dean behind construction of Farinon, passes away at 64 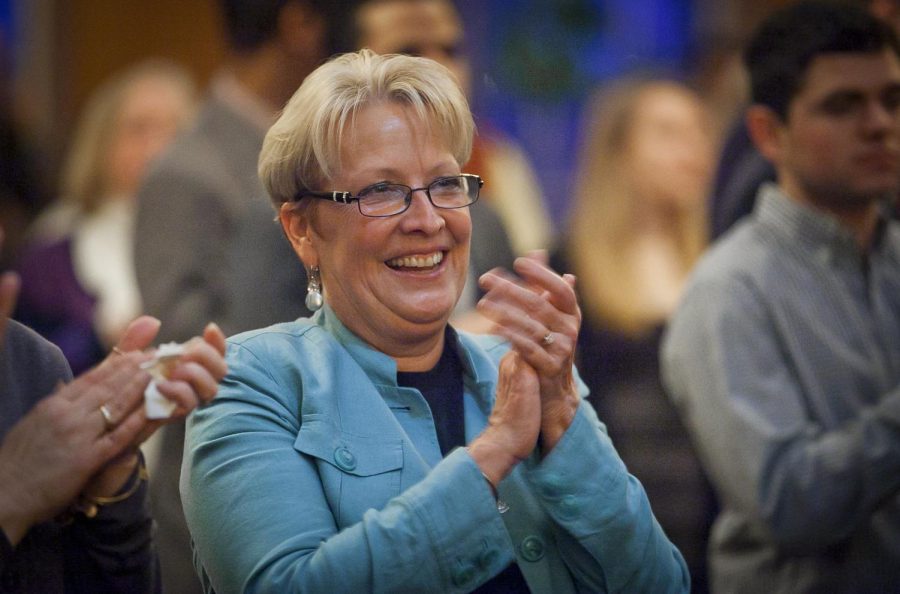 Pamela “Pam” Brewer, the retired Associate Dean of Students who created the Lafayette Leadership Institute and had an instrumental role in the construction of Farinon College Center, passed away on April 23. She was 64.

“You think of your supervisor or your boss—somebody you work with—you figure you’re here, eight hours a day, five days a week. You probably spend more time with them than your own family,” Kelly Deemer, the Student Involvement office coordinator said. “I had only ever had one other supervisor before her…She really was the only one I ever really knew. I miss coming in and seeing her every day.”

Deemer and Brewer were close friends, having worked together for the entirety of Brewer’s tenure at Lafayette. The two often babysat for one another and grabbed lunch at least once a month, even after Brewer retired in 2015.

“I can remember she took me out to dinner with my husband to this restaurant where the waiters sang opera. We would do Christmas parties, you know, at coworkers’ houses every year, and we cooked and everything. I mean she would do anything for me. She was really a good person,” Deemer said.

Brewer got her start at the college in 1988, after a chance meeting with a former college vice president. During her tenure, Brewer was deeply involved with the development of Farinon College Center, which completed construction in 1991.

“[Brewer] worked closely with the architects in designing and creating. She did focus groups,” Vanessa Pearson, the director of Student Involvement, said. “She was even instrumental in getting donors from what I understand. I think she was very close with the Farinons themselves.”

In 1996, Brewer founded the Lafayette Leadership Institute, an annual conference for student leaders, and oversaw the program for the next two decades. During that time, Brewer advised Student Government and took part in the planning of commencement addresses, presidential inaugurations and the 250th birthday celebration of the college’s namesake.

After her 2015 retirement, Brewer continued to work with the college on a part-time basis, eventually returning in 2019 when Kristin Cothran, the director of Student Involvement, left her post for Colgate University. Pearson would later take over the role, but in the interim, Brewer again oversaw Student Government, where she would hand paint rocks for representatives who earned “You Rock” awards.

“She went out of her way to meet one on one with every member of the executive board,” Gina Beviglia ‘22, the four-term director of the Student Government PR & Marketing Committee said. “She’d seen it all and was just very comforting…She clearly loved to reminisce about her time as the advisor of Student Government. It’s nice to think that she got to do that again.”

Brewer assisted the search committee which recruited Pearson, who took over as Student Government advisor upon being hired.

“When I first met her, I felt an immediate sense of calm, of just openness,” Pearson said. “She was extremely compassionate and spoke very highly of Lafayette. So I kind of got a sense right from the beginning that if Pam was indicative of the type of people that were at Lafayette, then I want to be here.”

Melissa Dalrymple, assistant director of Student Involvement, said that Brewer’s return to the department gave Dalrymple the time to run the Lafayette Activities Forum. Brewer also showed her the ropes of overseeing the yearbook.

“Pam was just the sweetest thing that you could ever imagine,” Dalrymple said. “I mean, who comes out of retirement to help an office that you don’t work for anymore? She was a saving grace during that time for sure.”

Dalrymple recalled one occasion when Brewer taught her how to decorate cookies.

“It just felt like such a motherly thing for her to do. She’s on the phone, old school, saying ‘Okay, now you use this much meringue powder.’ She was just so specific and, like, heartwarming that she called me in the middle of the day. She helped us still feel like people,” Dalrymple said.

Although her impact on colleagues was notable, it was Brewer’s connections with students which cemented her Lafayette legacy, according to Annette Diorio, the vice president of Campus Life.

“[Farinon], of course, will be here for a long time to come,” Diorio said. “But it’s almost like an emotional legacy that lives on in a really positive way. Before we used to use terms like ‘student-centered,’ Pam was living that student-centered sort of professional life.”

A memorial service for Brewer will be held at 1 p.m. on Friday, May 13 at Colton Chapel, according to The Morning Call. In lieu of flowers, contributions in her memory may be made to College Hill Presbyterian Church.