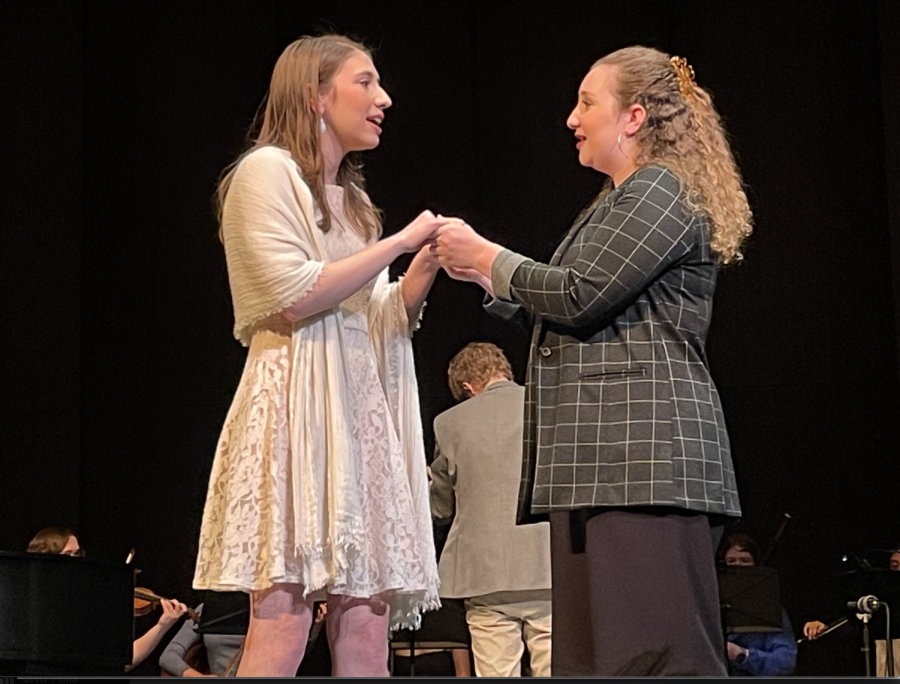 Sarah Candido '22 and Meredith Forman '24 performed in 'Missed,' a chamber opera by Anna Zittle '22. (Photo by Shirley Liu '23 for The Lafayette)

None of these students came to Lafayette with the intention of being composers. Throughout their time in the music program, they found a passion for creating musical stories.

Zittle, for instance, did not know she would end up doing a music honors thesis.

“My thesis was originally going to be a micro-opera—that was, until I ended up writing 20 minutes of music,” Zittle said.

“When writing the opera, it was really important to me that it was about two women, but also universal. I feel like a lot of people have someone where they’re like, ‘What if something had happened between us?’” Zittle said.

Sarah Candido ‘22 and Meredith Forman ‘24 performed alongside each other as the main love interests.

Reflecting on the performance, Zittle was particularly impressed by the dedication of everyone who participated. Her crew of 14 people “killed it,” she said, thanks to everyone’s willingness to be involved.

“It was incredible to be able to sing original work and perform without masks again,” Forman said. She said she was thankful for the opportunity to perform on stage with other talented musicians.

Zittle is also a member of the [email protected] Quartet along with members Kogasaka, Beth Anne Castellano ‘22 and Kieran Ameres ’25. At the showcase, [email protected] performed “Lost Shadow,” an original piece by Kogasaka that evokes contrasting moods about his experience during the pandemic.

For Zittle, working with [email protected] was different from working on her chamber opera. She was able to balance the two projects because she both directed her own work and was a performer in Kogasaka’s orchestra piece.

The event program stressed the importance of “small, selective and intensive courses” to develop the skill sets which made the performances possible. All of the students who showcased pieces have taken three or more courses in music theory in addition to seeking outside instruction.

Additional performances from the night included Payne’s fixed media playback “An Eternal Cycle,” which is about the cycle of life as it becomes increasingly chaotic and beautiful. Freiheiter showcased “Iridescent Fantasy” for the trumpet and bass, inspired by Japanese composer Yasunori Mitsuda. Freiheiter played the trumpet and Quintin Sefton ’22 accompanied on the bass.

“The beauty of the concert was that every piece was so different,” Zittle said.