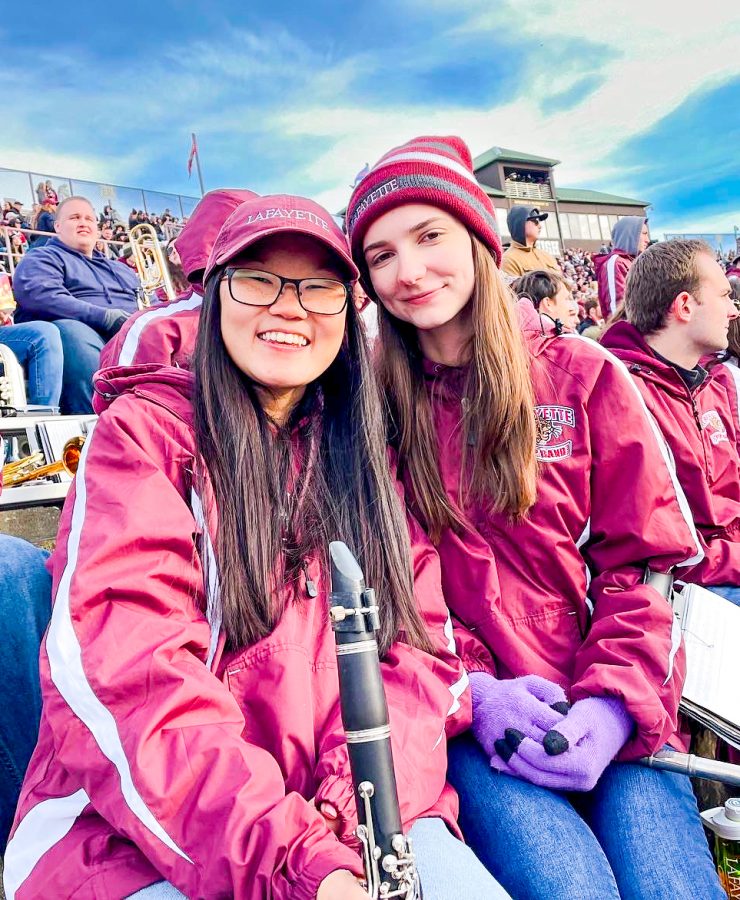 Presley Anderson ‘22 and Abby Esposito ‘22 bonded through their interest in joining the Pep Band. Four years later, they’re the ones running the music group—and they are closer than ever.

From May 2021 to the end of this April, Anderson held the role of president while Esposito was vice president. In that time, the duo gave back to the Pep Band and the sense of community that it has provided them throughout college.

“Most of my friends are from Pep Band. It doesn’t matter what grade you’re in, you’re friends with everybody,” Anderson said. “It brings you together because you enjoy playing music and you enjoy playing with each other.”

During her presidency, Anderson was in charge of communicating with campus and the rest of the band to plan events. In addition to sporting events, the group has performed at move-in day, Accepted Students Day and Lafayette Activities Forum events.

One of the most rewarding parts of their leadership experience was planning this past summer’s band camp, an annual event where the Pep Band prepares for the upcoming semester and builds community. After a year of not running band camp due to the pandemic, Anderson is proud of what the group accomplished this summer.

“It was definitely a learning experience,” Anderson said. “I’m happy that it worked out.”

When Esposito was a first-year, band camp was where she launched the beginning of her Lafayette experience and found a sense of belonging.

“Without Pep Band, I don’t know what I would have done.” Esposito said. “Having band camp and having an established group really gave me my first set of friends and a foundation to build off of.”

Outside of their leadership positions, Anderson played the clarinet and Esposito played the flute for the band. Esposito said that her favorite part of performing was doing the halftime shows, where the band had the opportunity to play songs by Lady Gaga, the Beatles and Stevie Wonder. Esposito loved the change in pace brought by these performances.

“Rather than doing pop songs in the stands, being able to play those through and put on a show for people I think was the most fun part in terms of musicianship,” Esposito said.

For Anderson, finally learning how to play the Lafayette Fight Song on the flute this year was an exciting moment as a musician.

“Every year I struggle with it for some reason,” Anderson said. “This year, I was actually able to learn it and play it. I was like, ‘Wow, after four years.’”

However, Anderson’s time with Lafayette’s music scene will not come to a complete close after graduation. She will be an admissions counselor for the college and hopes to play with the Pep Band during alumni events.

As for Esposito, she will be moving to Boston to work as a research technician after graduation. Though she will be far away from Lafayette, she is still very interested in paying a visit to see the Pep Band when she can.

Whether they’ll be hundreds of miles away or just around the corner, the two will carry with them the large impact that the Pep Band has had on their college experience. Anderson will always remember a moment when the band had to play in the pouring rain during a football game this year. Though they were freezing and most of them were not able to play their instruments, the band made the most of it.

“It was a fun bonding moment,” Anderson said. “Because we were all miserable, but we were in it together.”