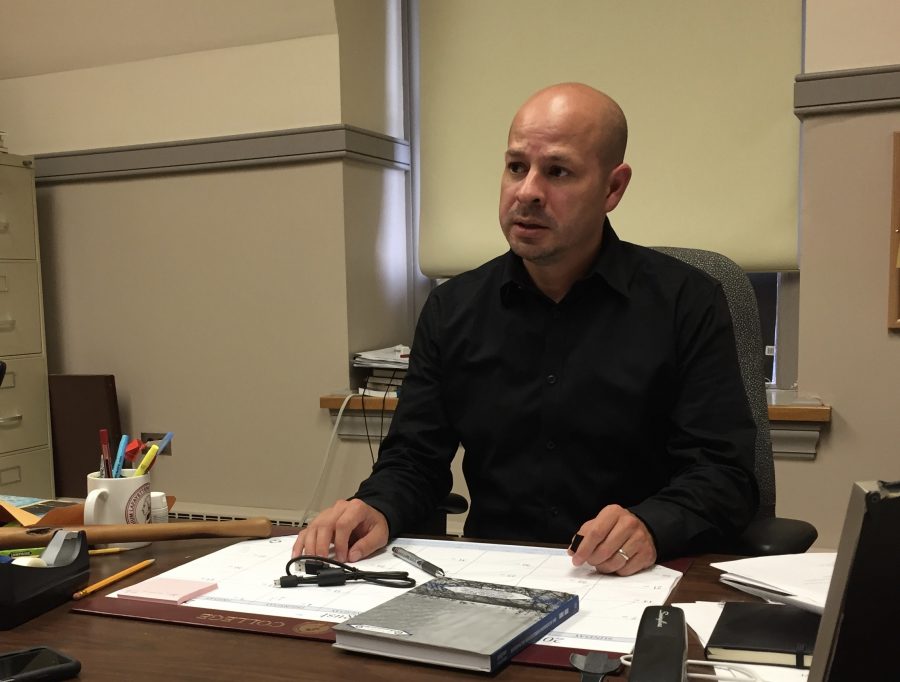 Professor Juan Rojo announced he went on hunger strike today to protest the denial of his tenure. (Ian Morse '17)

This was a breaking news story and has been updated. Check here for updates.

A Lafayette assistant professor announced today that he is going on a hunger strike to protest President Alison Byerly’s decision to deny him tenure and to protest the tenure review process.

Juan Rojo, who teaches Spanish, began the hunger strike when the first faculty meeting of the academic year began at 4:10 p.m.

At the beginning of the month, he was denied tenure for the second and final time. Rojo said his department voted 6-0 to grant him tenure, after which the Promotion, Tenure and Review (PTR) Committee submitted its 6-1 vote to recommend tenure to Rojo on Dec. 18.

According to documents given to The Lafayette, the decision then went to Byerly, who exercised her power to veto the committee’s decision. Explaining her veto, she wrote Rojo a four-page letter. The PTR committee then responded with a letter supporting Rojo that also included a dissent from the member of the committee who agreed with Byerly.

“It’s a terrible position to be in,” Rojo said. “It’s especially painful when you have done everything you were asked to do, and the faculty are calling and recommending you be tenured, and one person has decided that not be the case – for reasons that the faculty committees have evaluated and found to have no basis.”

The college issued a statement on the matter late Tuesday night.

“We were very concerned to learn today from Professor Juan Rojo that he has commenced a hunger strike in response to his recent tenure denial,” the statement read. “We are of course not able to comment on the specifics of Professor Rojo’s case.”

“However, in this tenure case, as in all others, we followed our procedures as laid out in the College’s Faculty Handbook,” it continued.

Before making the decision to go on hunger strike—for which he said he will only be drinking water and Gatorade—Rojo discussed it with his family and his doctor.

“We respect Professor Rojo’s right to disagree with the decision, but hope he will express his views in a way that does not endanger his health,” the college’s statement read.

“So I have to decide: Do I choose a career elsewhere? Or do I choose a different career so I can keep my family here?” Rojo said. “I’m baffled why I’m being asked to leave.”

Rojo—who has been teaching at Lafayette since 2008—said that his strike will not be brought up in his classroom.

“This is not what I’m going to be covering in classes,” he said. “I am going to do what I’ve been asked to do, which is teach [the students].”

As part of a speech Rojo wrote to announce his strike to the faculty, he said that he plans to end his hunger strike when he is granted tenure and changes to the tenure review process are implemented.

According to his written statement, “I will end my hunger strike when

“1. The Board of Trustees upholds the Promotion, Tenure, and Review Committee’s decision that I be granted tenure and

“2. The Board of Trustees agrees to accept changes from this body to the Tenure Review process. Specifically, I would propose that deadlines be established after the Promotion, Tenure and Review Committee’s decision is made so that no candidate endures 8 months of doubt. In addition, I would suggest that the term “compelling reasons” be defined to clearly establish the grounds by which a President may overturn the Promotion, Tenure, and Review Committee’s decision.”

This was a breaking news story and has been updated. Check here for the full report.