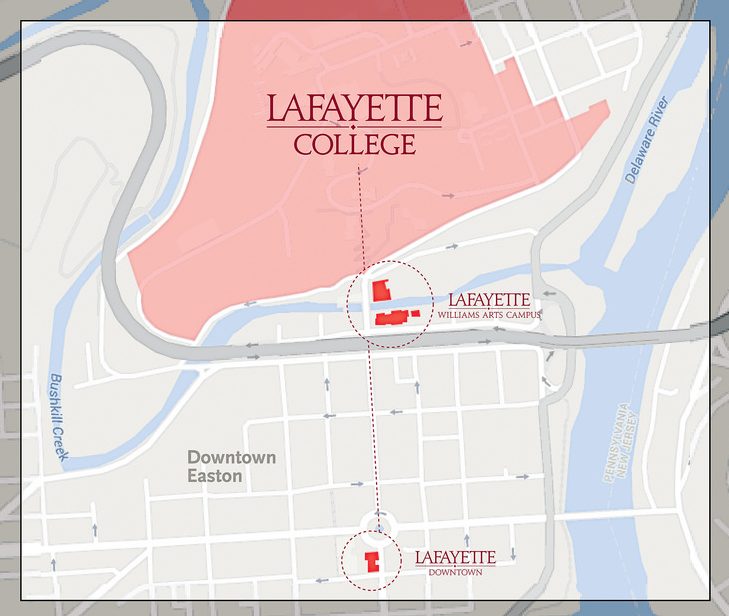 Lafayette announced plans over the summer to expand on College Hill and in Easton, including several new buildings, more competitive faculty salaries and increasing enrollment at Lafayette by 400 by 2025 – without higher tuition increases.

The goal that ties it all together, according to President Alison Byerly and Vice President of Finance Roger Demareski, is increasing the affordability of the college to those less able to pay full tuition.

“It’s not just because we want to have some new housing, or we desire to knock down some building,” Demareski said. “It’s really that we want to grow the student body to support the financial aid program to help keep and make sure that the Lafayette education is accessible to all who both deserve to come here and who we enjoy having here.”

Demareski described the decision to expand as arising from Byerly’s initiatives to make tuition more inclusive and accessible to more people. Increasing the student population, he said, will bring in more revenue that will be devoted exclusively to financial aid. The new buildings, faculty and location of offices are “operational” changes required to increase enrollment from 2,500 to 2,900, according to Demareski.

Lafayette announced that $75 million will be devoted to the Integrated Science Center, of which $25 million still needs to be raised through donations and $15 million will come from the college’s borrowing. Lafayette is in the planning stages of renovating existing buildings on Bushkill Drive at the bottom of the hill, as well as constructing new dorm buildings located on McCartney Street that will hold 550 beds for students. The Information Technology department, Communications division, Center for Community engagement and 12 admissions employees are being moved to the Alpha Building on Centre Square in downtown Easton.

The entire project, including increasing faculty members and salaries, does not have an estimated cost. Byerly said that the cost of new residential spaces will eventually be offset by the added enrollment’s tuition payments.

“The premise is that expansion will actually bring resources,” Byerly said, “because in working with the space we have and the space we need to add…it should not cost us as much per student to expand as we pay per student now.”

“The buildings will be paid for by the students who are living in them,” she added.

“The idea is that if we have more students,” Demareski said, “after net tuition – tuition after financial aid – and after other expenses, we’ll produce net revenue. In our normal budget model, that net revenue gets distributed among departments.”

“We are going to take the cohort of expanded students, their net revenue, and move that directly to financial aid.”

Lafayette news communications articles cite the expansion of the student body as a goal itself, in addition to amplifying the college’s distinctiveness.

In the college’s plans, the properties aiming to be torn down for new residential and administrative spaces are under the college’s ownership already, except for Campus Pizza on the corner of McCartney and March Streets.

“Lafayette has always maintained that when we buy a property off of campus proper, we pay our property taxes…same as everyone else,” Demareski said. “We don’t want to impact the tax rolls.”

The current plan for expansion includes putting a parking lot where the Portlock Black Cultural Center, Newman House and the Hillel House are right now. Co-director of the Hillel House Ethan Berkove said that he had no knowledge that the college was publicizing these plans before he read them on Lafayette College’s website.

“I think it would have been nice to be contacted about it beforehand,” said Berkove, who is also a math professor. “I do hope that if there are any changes, then the changes result in an increase in the utility of the space.”

She also said that she plans to hold a campus town hall meeting on the expansion plans on Sept. 26, after the details are finalized.

“We certainly will seek student input as well,” Byerly said, “as soon as we have a better sense of what some of the more concrete details are.”

Byerly added that the college is now beginning to seek input from the Easton local government.

Demareski said the six-to-eight year plan is planned to be finished in the next ten years. According to the college’s current plans, public safety and plant operations would be located down the hill, on Bushkill Drive. The block from March Street to Clinton Terrace is planned to be a walk-in health clinic for students and local residents. The college plans to hire 40 more faculty, to maintain the faculty-student ratio, and offer more competitive salaries.

The college received approval from the board of trustees in February for the initial plans and intends to break ground on the Integrated Science Center, located behind Acopian by plant operations, next spring. The college plans to increase student enrollment by 50 students every year beginning this year until it reaches its goal.

The college also announced in August that it had settled on plans to provide easier transportation up and down the hill in the form of an outdoor elevator, called a skyway. After consulting with firms about whether to instead have an inclined elevator, college administration settled on the skyway as the most efficient and environmentally friendly option, Demareski said.

The skyway is earlier in the planning stages than other expansion plans at the college, Demareski said, adding that it will have glass doors but reflect Easton’s architectural style.