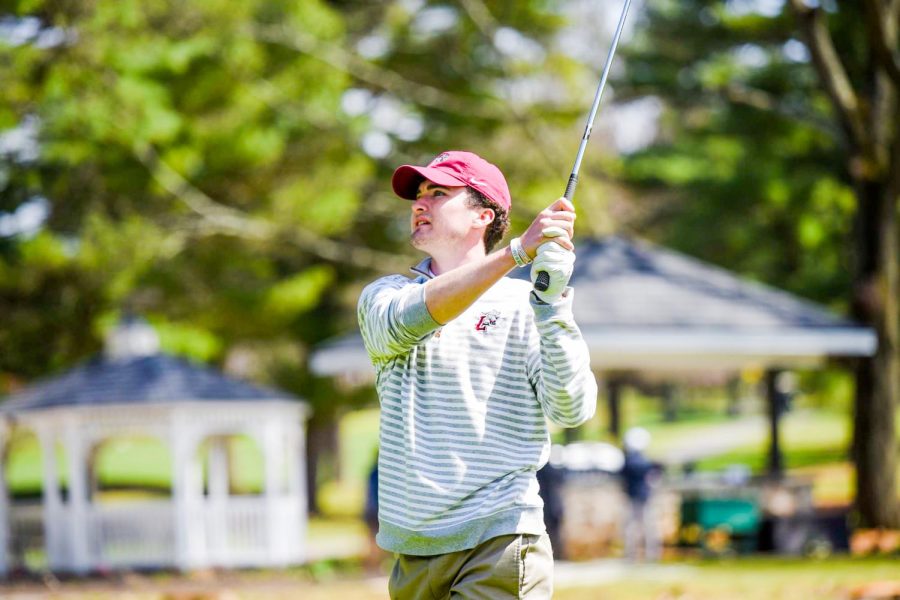 Sophomore Raymond Dennehy gazes at his shot during his top ten finish of one-under-par at the Lagowitz Invitational. (Photo Courtesy of GoLeopards).

Last weekend, the men’s golf team tied with Villanova to place fourth out of 14 teams in the annual Alex Lagowitz Memorial Invitational hosted by Colgate University.

Leading the way for the Leopards was sophomore Raymond Dennehy, who placed ninth, finishing one-under-par with a total score of 215. He finished rounds one, two and three with a 69, 71 and 75, respectively.

Sophomores Michael Walsh and Michael Bell also put on impressive performances. Walsh tied for 18th, shooting two-over-par for a score of 218, while Bell tied for 27th, shooting four-over par with a total score of 220. Bell finished the first round with a 76 but was able to discover his tempo in round two, finishing with a 68 that consisted of seven birdies. He recorded a 76 once again in the final round.

Closing out the top four for the Pards was sophomore Sean Saw, who placed t-35 overall and concluded with a score of 222, or six-over par. This outing from the Leopards was significantly better than their performance in the same tournament last year, in which they placed 11th out of 15 teams.

“This was a good opener. We put in a lot of work during the offseason, and played in a lot of tournaments and got better,” Dennehy said. “We are a more complete team since last year. We had a lot of missing links last year that I feel like we don’t really have this season, and our chemistry is much better.”

After the first two rounds, the Leopards were in third place, with a shot at the overall victory. Unfortunately, they fell behind in the final round, dropping to fourth. While this was an improvement upon their performance last season, it is not quite where they wanted to be.

“Our goal is always to come out with a win. We didn’t play our best to get it done last weekend, but we have this week to improve for our upcoming tournament this weekend,” Dennehy said. “We definitely have chips on our shoulders coming into the weekend.”

In addition to the team, Dennehy himself faced some challenges in the final round. After the first two rounds, he sat in second place but dropped to ninth after the completion of round three.

“When you’re in the position to win a tournament, the nerves start to kick in,” Dennehy said. “I feel like one day I will end up coming in first in a college tournament, but this was definitely the closest I’ve gotten so far.”

This tournament was their first since the graduation of two senior leaders and captains from the class of 2022, Kazuki Osawa and Patriot League Golfer of the Year Ryan Tall. The team now looks to build momentum throughout the fall for the spring season especially with their top finishers all being sophomores.

While this was certainly a solid outing, there is still room for improvement surrounding the men’s golf team. Dennehy and the Pards look to carry the upward momentum they’ve established since last season and improve upon their performance last weekend in hopes of coming out victorious.

The Leopards will be traveling to Farmingdale, N.Y. this weekend to compete in the Gimmler Invitational hosted by Saint John’s University.