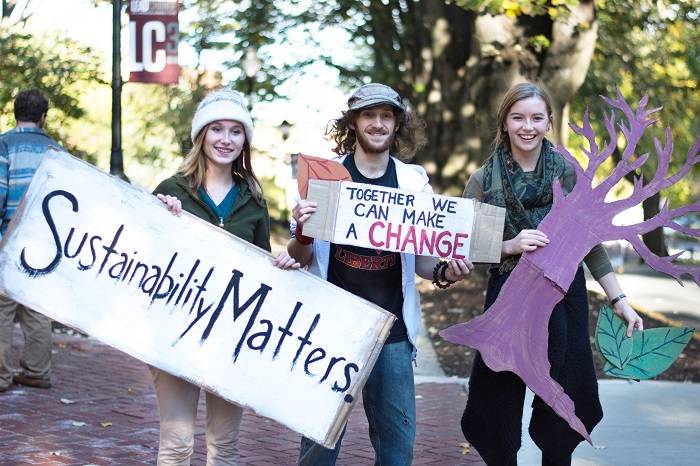 Almost a year after President Alison Byerly announced via megaphone to a group of students on the steps of Markle Hall that the college would hire a sustainability director, the search for one is still underway.

That group of students had marched from Farinon Student Center to Markle Hall to urge the college to take action on sustainability and hire someone for an administrative position devoted to the issue. Miranda Wilcha ’16 had been a leading force in the march and became employed this August as Lafayette’s first sustainability fellow.

The committee searching for a director of sustainability brought Wilcha on “in lieu of a sustainability [director] right away, because [the search committee] wanted to be sure that the search would be perfect,” according to Wilcha.

Due to the confidential nature of search proceedings, Lawrence wrote that she could not comment further on the matter.

When asked, Byerly was unsure what the status of the sustainability director search was or if Lafayette had hired one.

Engineering studies professor Ben Cohen was Wilcha’s professor last year in her environmental studies course. He also helped write the advertisement for the job and argued to the administration that someone needed to be hired for the position.

Cohen said that he wished the search committee had gotten an earlier start last year in December or January, as opposed to May. However, he is thankful now that the college has brought on a sustainability fellow, which is something that may not have happened had the college found a director by the fall.

“I was frustrated that the pace was too slow from the administration in the spring, they didn’t get the search started until the very end of the spring,” Cohen said. “I think that compromised our ability to have the best search that we could, so that was problematic at the time, but they’re not rushing it now.”

“I think we actually got lucky,” he added. “It may have worked out better because in the intervening time we’ve hired a sustainability fellow, and she’s here on staff now, and she’ll help the sustainability director, so we’ll have two people.”

The difference between the director and the sustainability fellow will mostly be that the fellow has a “more limited scope of responsibilities,” Lawrence wrote in an email.

“Basically I’m going to be working on drawing up reports for the sustainability coordinator once they’re hired on,” Wilcha said of her role. “I’ll be able to provide information to them right away, get them onto campus easily, give them a list of measures I think we can achieve. And I’m drawing up plans for my own initiatives to start as well.”

Once the sustainability director is hired, Wilcha will work under his or her guidance, she said. Until then, however, she reports to Demareski and the rest of the search committee.

“I hope the process moves swiftly so we can have a sustainability [director] as soon as possible,” Wilcha said. “But I understand needing to take their time to choose the right candidate.”

Correction: an earlier version of this article failed to include Sarah Edmonds and Peter Todaro ’17 as members of the search committee. It has been updated to include the correct names. Updated 9/8/16.