When Family Weekend is every weekend: Lives of students with professor parents 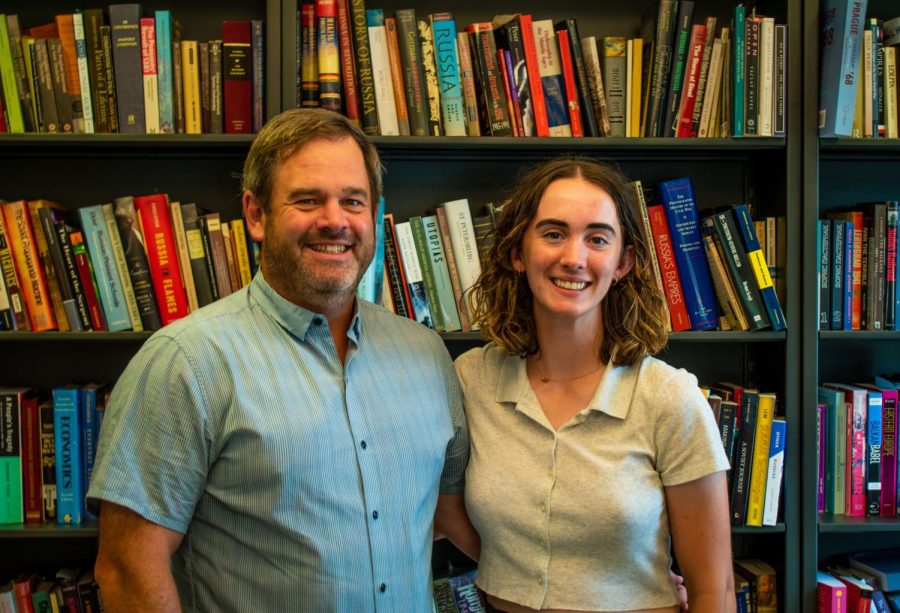 Recently, parents had the chance to visit their children on campus during Family Weekend. For some Lafayette parents, their children walk the same halls they do — several professors at Lafayette have children who also attend the college.

Grace, who is pursuing a double major in English and environmental studies, didn’t always see herself as a student on College Hill. Originally, she didn’t want to go to school so close to home.

After going through the application process during the COVID-19 pandemic, she saw Lafayette as the only choice that made sense.

“Coming in, I didn’t really have any expectations, but I’ve kind of carved out my own niche here and I’m really enjoying it,” Grace said.

One of the biggest adjustments for Grace was interacting with the students in her father’s first-year seminar (FYS) class.

“I had people in my dorm and on my floor that were in his FYS. I would walk into a room, and if they were talking about it, they would stop and look at me like, ‘Oh, should I say this or not?'” Grace said.

Professor Sanborn tries to let Grace have her own experience on campus. “I obviously have a lot of friends on the faculty and she takes classes from my friends, but I don’t ask them about her or ask her about them,” he said.

Professor Sanborn enjoys accompanying Grace, who plays on the golf team, to her tournaments.

Music professor Jorge Torres started teaching at Lafayette when his daughter Genevieve Torres ’24 was only two years old. Now a psychology major with a minor in art, Genevieve remembers Lafayette and her father’s teaching as being a part of her life from her earliest days.

“I was always kind of involved in [his] performances and seeing [him] teach students, so I feel like that was, from the start, a positive way that college was portrayed to me,” she said. “I got to see how he interacted with the students and extracurricular activities and opportunities that he had.”

Specifically, Genevieve recalled Professor Torres’ trip to Peru with Lafayette students as an event that made her realize what opportunities college students could have.

“We used to go sledding down the hill where Oechsle Center for Global [Education] is now, climbing on trees and coming to all kinds of performances,” Professor Torres said of time spent with Genevieve on campus during her childhood.

Despite the tuition benefit that the school offers to children of faculty, Professor Torres tried not to push Genevieve towards any particular decision.

“I remember that we drove around to lots of places to visit other campuses. While I had my fingers crossed, I kept my silence and knew she could make the decision that was best for her,” he said.

Both Grace and Genevieve decided to major in areas that are not in their fathers’ departments.

Grace has always been interested in English, and her parents encouraged her to pursue what she was interested in. She was also more focused on entering a liberal arts program than choosing the specific subject she would study.

At this time, Grace does not have any plans to take classes in the history department.

Similarly, Genevieve has taken one music class at Lafayette, but has never been in one of her father’s classes. She does, however, play in the ensemble that Professor Torres directs.

“I get to see her on Thursday nights playing her flute,” he said. “It’s very, very, very exciting.”

Professor Torres enjoys running into Genevieve on campus from time to time.

“I was getting something from interlibrary loan, and I was passing in front of Gilbert’s,” Torres said. “She was sitting with a bunch of her friends having lunch and then came over and gave me a nice hug, and I really liked it.”