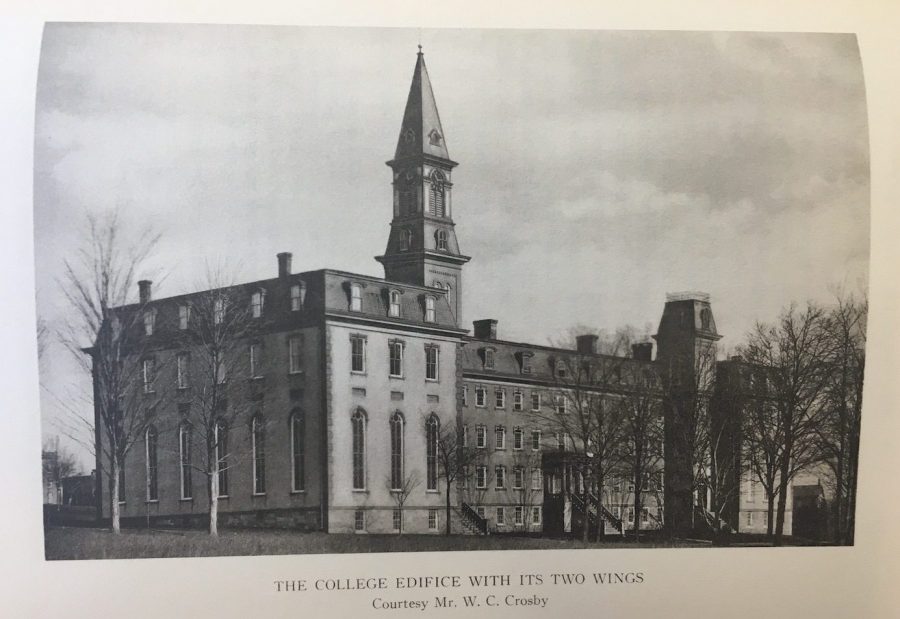 “The Biography of a College” by David Skillman details the rich history of the first building on Lafayette’s campus. On June 14, 1833, then-President George Junkin broke ground on the building of South alongside six students. On April 1, 1834, the college moved in.

The original building had a prayer hall, two rooms for the two literature societies, a room for The Brainerd Society called Brainerd Hall, fifty dormitory rooms and an apartment for the president and his family.

In 1871, work began on the west wing of South. When the west wing was finally finished, it included a beautiful new chapel “trimmed with black walnut, frescoed walls, high ceiling, stained glass windows, black walnut pews, seating 700 and a gallery in the rear” according to “The Biography of a College.” The steeple was also raised that year.

The second set of renovations to South came in 1909. By this time, the college had expanded significantly. The literature societies had moved to Pardee Hall, the Brainerd Society no longer resided in South, and the library had a new home. For a cost of about $45,000 South was given new floors, stairways, woodwork, walls and new and modern bathrooms were installed. The whole building now had electricity and steam-powered heating.

In a historic move for the college, the chapel in South was renovated in the 1920s to include a faculty room for social events – the first time the college held such a space.

A fire broke out in South on March 2, 1956, destroying the tower and a significant part of the west wing. The west wing was subsequently shut down and 67 students were left without living spaces. Six years later the dorm was renovated to increase the number of students that could live inside by at least 90, and up to 100 students.

On Oct. 26, 2001, the West Wing was renamed Jesser Hall, dedicated to Ned ’39 and Ruth Jesser, a couple who donated millions of dollars to the school.

Today, South College stands as a building that has withstood fire and the test of time.