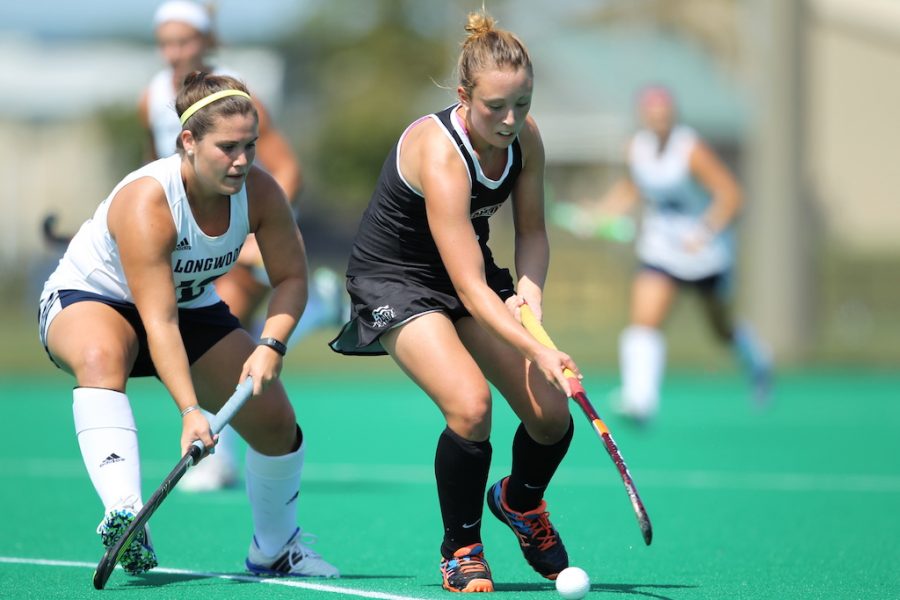 Rachel Robertson: The field hockey team is off to a great start. You are 4-1 on the season so far. What has been the key to success for the team so far?

Rosie Shanks: I would definitely say just being consistent in our play. Especially last year, a big struggle for us was making sure everyone was contributing and having a baseline level. Whereas this year everyone came into preseason and performed well. The biggest thing as well, all of our freshmen are really contributing… I think that’s a huge thing for us that not many schools can say that their freshmen are contributing right away.

RR: What about this class of freshmen have prepared them to contribute right away?

RS: They came in physically fit. I think their fundamental skills were great and honestly they are just very open to know their role on the field but also being willing to just step up when they have to.

RR: All of the team’s wins so far have been by one goal. Is that something that is in the makeup of the team— those close games— or is that just field hockey in general?

RS: Field hockey is like soccer, it is quite a close scoring game. I think, for us, we do need to focus on finishing. That’s been a huge emphasis in practice. We’re getting so many opportunities with attack penalty corners and we’re just not converting. For us, these games could be bigger wins, but at the moment honestly we’re happy to get the win at the end.

RR: You are tied with freshman Rosa Jonckheer for the team lead in goals. After scoring three goals in five games, what has been going right for you offensively?

RS: Over the summer I was home in Scotland and playing a lot of field hockey. I really got my nose for the goal again and just came in with a good mindset, and I’ve been in the right position at the right time.

RR: Three goals almost matches your career high for goals in a season [four last season] at Lafayette. What has been different this year compared to previous ones?

RS: Everyone just had a great preseason this year, and I’ve known in the past that the more comfortable and settled I am the more goals I score. I don’t know what it is that’s going right this year, but everyone came in with a great attitude. I think I just fueled off of that.

RR: You mentioned earlier that you are from Scotland. The field hockey team currently has seven international players. How does that change the dynamic of the team?

RS: The majority of them are from Canada. Then this year we have two girls from the Netherlands, and then I was the only other European. I don’t think it changes too much of the dynamic, but I do think it is nice to bring in a different culture of hockey. I know in Europe we’re more skill focused than tactical. It just brings in a new perspective.

RR: You played with the Scottish national team a bit before coming to the U.S. What was that experience like?

RS: That was really fun. It was certainly an overwhelming experience and something that I will never forget.

RR: So why did you choose to play and go to school in the U.S. rather than staying in Scotland?

RS: Well, my parents actually have a holiday home in South Carolina, so I’ve been coming every summer since I was probably about three years old. One summer I was pretty bored so I found the closest hockey camp to me which happened to by UNC Chapel Hill, which is a huge program in field hockey. I saw how much money was funded into athletics here and honestly I was just so overwhelmed that I was like I have to come here for university.

RR: So why Lafayette?

RS: I came for a few unofficial visits and when I met the players and the coaches and just the dynamics between them I really wanted to be part of that family and just have a set up at school where I always had a safety net.

RR: Because you have spent the last part of your athletic career in the U.S., but you’re originally from Scotland, I’m curious who you rooted for in the Olympics—Great Britain or the U.S.?

RS: Great Britain, and it was pretty awkward sitting in a room of Americans when Great Britain beat America. Not going to lie, I enjoyed it but there was a lot of frightening faces at me afterward.

RR: Do you have a favorite athlete?

RS: Alex Danson who is a GB forward for field hockey.

RS: That’s a tough one. I’m going to have to go with Chicken Pad Thai. Thai Thai in Bethlehem, best restaurant I think I’ve ever been to. My roommate and I go every week, literally.

RR: Any words of wisdom?

RS: Fall seven times, rise eight. The other quote I usually go for is, “You miss 100 percent of the shots you don’t take,” but I feel that is a really stereotypical athlete quote.