A dynamic quintet: The Akinmusire Quintet to perform today at Lafayette 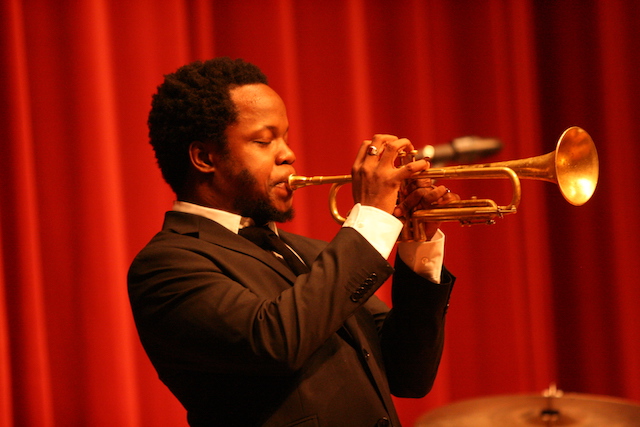 Ambrose Akinmusire went on his first tour as a musician when he was just 19 years old. He’s still playing the trumpet, and on Friday he will be playing at the Williams Center.

The performance, which is from 8 to 9:30 p.m., is part of the 29th Annual Easton Jazz Festival. The band features Akinmusire on trumpet, pianist Sam Harris, bassist Harish Raghavan, drummer Tyshawn Sorey and Joel M. Ross on vibes. Tickets are $25 for the general public, but free for students.

Born in Oakland, California, Akinmusire was a member of his high school jazz ensemble. He went on to study at the Manhattan School of Music, earn a master’s degree at the University of Southern California and attend the Thelonious Monk Institute of Jazz.

In 2011, Nate Chinen of the New York Times honored Akinmusire’s second album, “When the Heart Emerges Glistening,” with the title #1 album of 2011.

“His sound is exacting, with a cutting attack offset by a smoky tone, ” Chinen wrote. “As an improviser he strives for the unexpected, hurtling through precarious intervals.”

Akinmusire has since released a third album titled “The Imagined Savior is Far Easier to Paint” in which he plays with the sounds of vocalists, guitarists and flutists in addition to the traditional instruments of his quintet. In this album, Akinmusire strives for composition that ties together the various instruments.

“I could make an album where I’m the one who takes all the killing solos,” said Akinmusire in an interview with The New York Times. “But I just think that if everybody feels responsible for the music, then the music will sound better.”