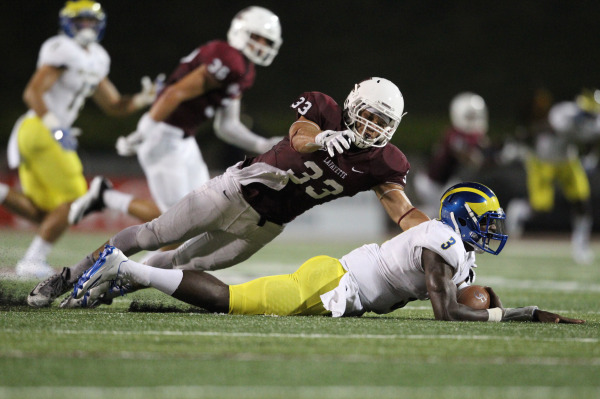 Meg Lillis: What are your team’s goals this season?

Brandon Bryant: The biggest thing is to win games. We had a rough year last year, so definitely to change things around this year. We got a win in the first game, and the last couple have been very close losses, so just to kind of get over that hump and get those wins.

ML: You’ve already had a lot of personal success. How are you able to stay motivated?

BB: I haven’t really hit where I want to be yet. My goal overall is to be an All-American this year, so I still have some things to reach for.

ML: How does a close game against a good opponent motivate you for this weekend’s game?

ML: What is the most important thing to keep in mind going into Saturday?

BB: Everyone needs to just stay focused and keep their heads up after last week, and just get ready for the next week.

ML: In what ways is this year different from last year?

BB: Last year we were dealing with a lot of issues, starting out obviously with the Brian Keller loss, so there were a lot of things going into last year, and injuries all throughout camp, so we definitely came into this year a lot fresher and ready to attack every game.

ML: How has your leadership role changed between last year as a sophomore to this year as a junior?

BB: I just know my role more now, so if someone has a question or someone doesn’t know something, being able to answer everything like knowing the defense, knowing how we do things at practice, kind of just being a role model.

ML: What’s the best part of being on the football team here?

BB: The relationship with the guys, honestly. It’s like a brotherhood. I don’t know how to describe it. I love everybody on my team.

ML: Is it hard to have those relationships on such a big team?

BB: There’s definitely people on the team that you’re not as close with as others. There’s about 90 guys. There’s a lot of people, but I try to be close with everyone that I can.

ML: Is it hard to maintain focus throughout a long, hard-fought game?

BB: I don’t think so. I think it depends how things are going, but you stay in the game the whole time.

ML: What is your favorite NFL team?

ML: Do you have a football role model or a favorite athlete in general?

BB: As a defensive guy, I always loved to watch Brian Dawkins play. Just the way he flew around, he was so confident in everything that he did. He was definitely one of my favorite players growing up.

BB: I just put Pandora on, honestly. I don’t really like really hype music before games. I normally put on J. Cole Pandora and whatever comes on I just vibe to.

ML: What are you most looking forward to this season?

BB: Definitely more wins than last season. Just getting out there with the team and getting wins.