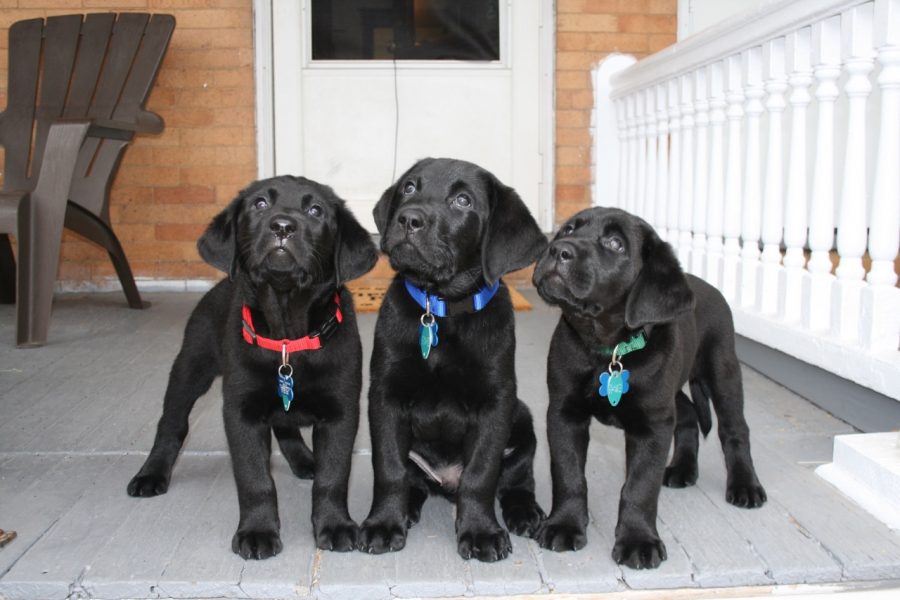 The three black Labrador retriever puppies are service dogs in training. They’re also the newest residents of the Dog House.

The Dog House is a dog training-themed Living Learning Community located at 633 Monroe St., and in its first year at the college.

The puppies’ trainers for the year are the eight students living at the house. They received the puppies last Thursday afternoon, and immediately took to them.

Ever since then they’ve brought them to SI sessions and club meetings, and walked them around the quad. As the puppies grow, so will their interaction with the college community.

Socialization is very important for the puppies. According to Astor, the students try to take the dogs to a socialization event such as a club meeting or a public place like Cosmic Cup every day.

However, training still comes first when in public with the puppies.

English professor and Dog House faculty advisor Bianca Falbo cautioned about approaching the animals while they wear their capes.

“If you see them around campus and they’re wearing their capes, chances are they’re training and petting is not appropriate,” Falbo said.

The dogs will go through two of three phases of their first year of training while on campus with the students.

“We only do [part of] the first year of training, which is very general sit, stay, all that,” Dog House resident Sydney Crowe ‘19 said.

The puppies were given to the students through an organization called Canine Partners for Life (CPL). At the end of the year, the dogs will go back to CPL to continue their training.

According to Crowe, the dogs will go through a second year of training with CPL that is more specific to the type of service they will end up doing after Lafayette.

“Hopefully, at the end of this, these dogs will become alert dogs for, like diabetes or cardiac arrests,” Crowe said.

The eight students, who went through multiple training sessions with CPL since last May, are broken up into three training groups. The dogs will rotate every Sunday between groups and the two adjoined houses.

Falbo said she believes that having eight students, who are all consistently following CPL guidelines, will only be beneficial.

Crowe agreed that the method of training is useful for the future occupation of the dogs. Crowe also said training is going well, and what the puppies are currently trying to master is potty training.

“Potty training is the biggest part, but that’s to be expected,” Crowe said.

The students said they felt this responsibility the first night the puppies arrived. According to Crowe and Astor, dealing with Hugo, Lance and Basie can be like dealing with three infants.

However, Astor said the exhaustion and hard work will pay off.

“It’s puppies, it’s got to be worth it,” he said. “And hopefully [in the end], we raise awareness about service dogs and the benefits they have for society.”