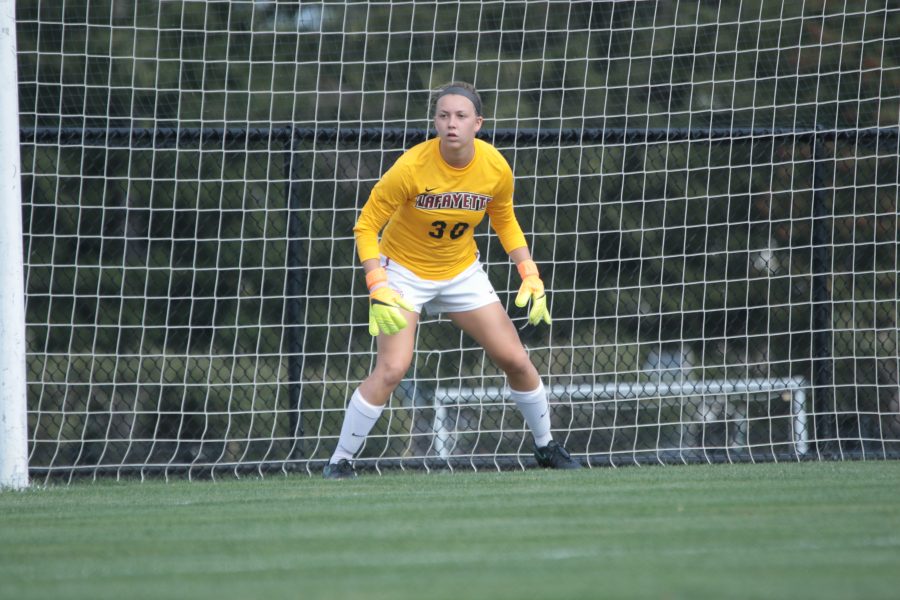 Rachel Robertson: The soccer team is coming off a clutch overtime win at Navy. Tell me about the game and what it means for your season?

Kelly O’Brien: We knew we had to win going into the game if we wanted to have a chance at playoffs so everyone was really amped up. The fact that it was their senior day, we were also excited about that. It sounds bad but our coach was like, “Let’s ruin their senior day.” We’ve played so well in all of our games […], we didn’t want to blow it when we’re so close [to making the playoffs].

RR: You are one of the two goal keepers for the team, splitting the time with senior Danielle Sedillo. Why did you decide to play goalie?

KO: Well, I don’t really like running so goalkeeping seemed like the right choice. I mean, I’m pretty tall so it kind of works. I played basketball growing up so I have pretty good hand-eye coordination. Honestly, I’m not that coordinated at my feet dribbling the ball, so it’s probably best for everyone that I can use my hands.

RR: On the team what are you most known for?

KO: My coach actually calls me a “poser” because I like to make really dramatic dives when it’s not necessary. That’s kind of like my personality to add a little flair to it.

RR: Does that translate to your life outside of soccer?

KO: Everyday. Something I do that’s just not necessary. Like this morning at lift, I was just dancing, for no reason. We were supposed to be lifting, but I was just like, “You know what? I really like this song, I feel it.” Did a little jig.

RR: So all of the teams you’ve ever been on have been great. Is it because of you?

RR: What do you bring to a great team that helps is get better?

RR: Not for the school, where is your favorite place to play?

KO: I went to South Africa [on an interim trip] and played there. That was amazing – the entire experience of all these kids coming out [to play]. They were so excited and that was probably the most fun I’ve had playing soccer, because I didn’t have to worry about anything. I was just there having a good time and just seeing the smile on everyone’s face.

RR: Did you school anyone in soccer, either Lafayette students or South African kids?

KO: I mean, I school everyone. I don’t take age into account when I’m playing soccer. It’s all out. Like I don’t care if you just learned how to walk, I’m going to cross you up. I’m going to pull all my moves.

RR: Who is your favorite athlete?

KO: Me. No, I’m just kidding. I’m a really huge fan of any gymnast that’s ever represented the U.S. I think they’re great. Also because I can’t do a cartwheel and they’re flipping on a two-inch beam.

RR: What is your favorite food?

KO: Probably a tie between Molecular Genetics and Abnormal Psychology. I’m a huge fan of Dr. Wenze who I had for Abnormal.

RR: If you were an ice cream what would you be?

KO: I mean my favorite ice cream is Moose Tracks so I would probably be Moose Tracks. It’s like kind of basic but it’s got some fun here and there. You’re like, “Oh surprise there’s a Reese’s Peanut Butter Cup, or, oh, a fudge swirl. You never know what’s going to be in that bite.”

RR: Do you have any pregame rituals?

KO: I have a lot of rituals. I always wear a necklace and a ring and I have a specific way I take them off. I always wear the same shirt under my jersey. I listen to the same songs. I tie my shoes a specific way. I’m very weird. When I sub in for the second half, I have specific things I do. I have to touch the cross bar, un-velcro and re-velcro my gloves a certain amount of times, I swing my arms a certain amount of times. Once the kickoff happens I tap my toes on the penalty spot twice. It’s really weird.

KO: Probably a lion. I would probably be more of a male lion, because they sleep more and they lay around a lot and just everyone thinks they’re better when secretly the females are better because they do all the stuff. I kinda like to do nothing and then get all of the credit.

RR: Who’s your favorite character in the “Lion King?”

KO: I hope people don’t think I’m conceited. I was mostly joking when I said I was great.