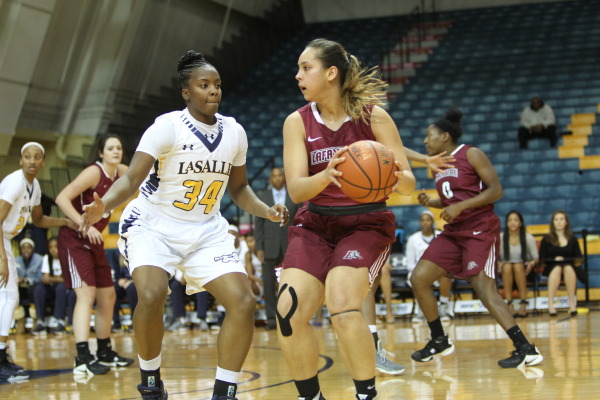 Anna Ptasinski '18 looks for a pass. (Courtesy of Athletic Communications)

Despite only winning one of their first two games, the women’s basketball team left with high hopes and good feelings about their upcoming season.

Last week, the Leopards began their 2016-2017 campaign as they kicked off the season with a nice 56-49 win over LaSalle. On Tuesday, the Leopards fell short as they dropped their second match, 76-58, to a tough Rider offense. Although the games had different results, the outlook on the season is positive.

“Our first two games were definitely good learning experiences for us as a team,” sophomore guard Alex Cantwell said.  “We saw what it takes to win, and also what we have to improve upon for the rest of the season.”

Against La Salle, the Leopards displayed an efficient inside game through senior forward Harriet Ottewill-Soulsby and sophomore center Angela Ribarich. They dominated on the glass, out-rebounding La Salle by a 55-39 margin. This led to 12 second chance points which proved to be crucial in the outcome.

Rider was a different story as their ability to shoot from deep was too much for the Leopards. In addition, the Leopards 26 turnovers led to 18 fast break points that went unanswered. However, the Leopards learned a lot about themselves despite their first loss.

“After playing Rider, we talked about how we have to cut down on turnovers and value possessions offensively in order to be successful,” Cantwell said.

Freshman guard/forward Olivia Gumbs has been a bright spot for the Leopards. She provides a dual threat to the team, as she has the ability to both score and rebound. Through the first two games, she has totaled 18 points and a team high 16 rebounds.

Up next for Lafayette is the Hall of Fame Challenge, where all teams will be represented by a Hall of Fame coach. The Leopards will head to Louisville, Ky. this weekend to take on Chattanooga, Louisville and Bowling Green.