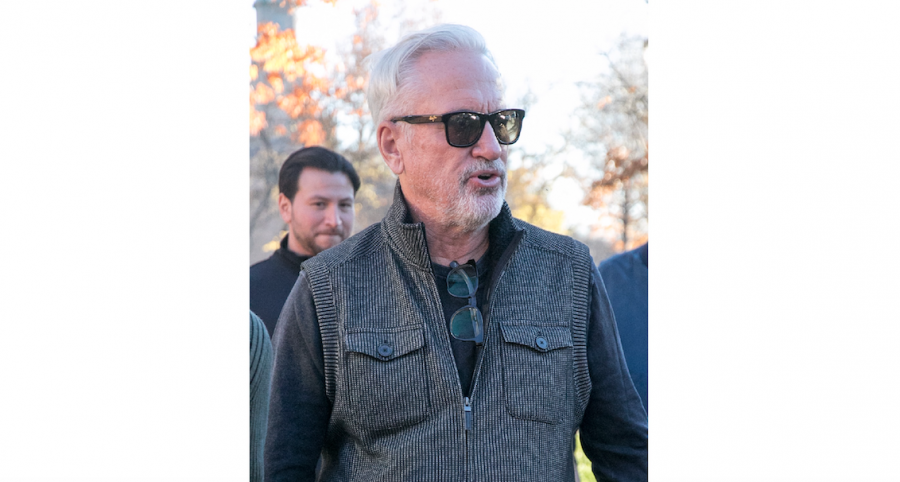 Rachel Robertson: Have you had a good Laf-Lehigh weekend so far?

Joe Maddon: We flew in yesterday, got into Philly. Then drove to Hazleton, saw my mom and took her out dinner. Then we drove back down here last night, and we’re doing all this now and it’s great. And the weather being as it is makes it even better.

Michael Keating: What’s the origin of “Try Not to Suck?”

JM: The actual time I first uttered it, Javy Baez said I said it to him in my office. He was a young player and I was just trying to get him to relax a little bit. For me, the biggest thing you’re trying to do within the Major League on a Major League Baseball field is to try not to embarrass yourself. I mean, believe it or not, the worst that happens when you do poorly is that you feel embarrassed. So we reduce that to “try not to suck.” Basically what “try not to suck” means is that you’re going to go out there, not worry about stuff, play as hard as you can, and what you’re trying to do eventually is to not embarrass yourself. That’s the essence of professional sports.

RR: As a manager, when you’re trying not to suck, are you going off your gut or data?

JM: Both, absolutely, it’s both. All the stuff that you see me do, I’ve been doing it for years that way. I’ve always been big on data but I’m big on my training also. To me the gut is more intuitive thinking, which is more like the blink principle [by] Malcolm Gladwell. I’ve been doing it for so long and faced with so many situations that your gut primarily is the culmination of your experiences coming together in the thick of the moment. So that’s why I’ve been better able to trust my gut because I think it’s well thought out and it’s not just a ‘by the seat of your pants’ reaction. Once I read that book, I was able to define intuitive thinking. To me, it made me more comfortable with making split decisions.

MK: I’m going to put you on the spot here: 100 plus wins, best record in baseball, you break a 108-year curse…do you think you got snubbed for Manager of the Year?

JM: It’s such a subjective award. It’s just a matter of how the writers want to interpret the year’s events. And a lot of times that award goes to the guy that they perceive was in charge of the team that overcame the most difficulty. With us, they didn’t necessarily read our youth as they read the Dodgers being injured. It’s really such a hard award to award, because it’s up to the individual writers. And you know it’s like anything else, they travel in packs and talk to one another so they probably created the narrative regarding how it’s supposed to be built out this year. And listen, Dave Roberts did a great job this year and I like Dave a lot. Dave knows more about wine than I do and he’s really bright and entertaining and interesting, so I was really happy for him.

JM: We’ve recently embraced something called Pingus. It’s Spanish and it’s really good. There’s Pingus and Pingus Flor. Now the Pingus is really expensive, so I’m not going to tell you go out and buy that, but the Pingus Flor is like $100 a bottle. It’s a Spanish wine from the Ribera del Duero region of Spain, which is my favorite region. I love this stuff, so if I had to pick one to drink tonight it would be that.

RR: Is that what you were drinking after you won?

JM: Well, we were drinking all kinds of stuff. We just had a manager of the year party from my house on MLB Network. We’re just trying to empty out the wine cellar. The worst thing to do is to keep good wine and not drink it, so we’ve been drinking all kinds.

RR: So I’m actually not a Cubs fan, I’m a Cardinals fan.

JM: I grew up a Cardinals fan.

RR: Fantastic. So for the postseason I 100 percent became a Cubs fan, one because of you and the other because of David Ross. Can you speak a little as to what he meant to the team and what the team winning meant to him?

JM: You have to understand that David is a veteran, and he’s the type of veteran that impacts your team in a positive way. He was still good and he played at a very high level, but he brings a high level of leadership to the group that you don’t always get from your veterans. He was very impactful with the young players as well as the veterans. He was the kind of guy in the clubhouse that would carry the message for the manager, where it’s going to be even more impactful on young players. So David was all of that. But, like I said he’s still playing at a very high level and on top of that he’s Jon Lester’s personal catcher, which really was important. David’s unique, he’ll be a Major League coach quickly if he wants to and he’ll be a Major League manager in five years if he wants. It’s just up to what he wants to do with the rest of his life.

MK: I’m a Phillies fan, so you’re involved in one of my favorite sports memories of all-time but unfortunately on the losing side.

MK: So, how do you change your mindset going into a World Series knowing that you’ve been to one before?

JM: It honestly, if this makes any sense, it helps you slow it down even more. It’s like any kind of experience that you have, once you’ve done it before and you get back into that moment you’re able to process it in a way that you don’t overthink it, you don’t think too quickly, you don’t react to stimuli that really doesn’t matter. Your players and people around you can get hyped up about things but you’re still able to keep it at a pace that is really workable and I think that if you can, the group around [you] also feels it in a positive way and that they’re able to slow it down. You’re always going to reflect the leader. The group is always going to reflect the leader in regards to how he’s doing their particular job. So I think, honestly because I really felt it this year, you could really slow things down from being in that position before.

RR: I interned this summer at the Baseball Hall of Fame, so this is coming from that perspective. If you could manage one player, who is not currently playing the game, who would it be?

RR: Or if there was one specific team that you would like to manage.

JM: Well, the 2016 Cubs is the best team ever to manage, outside of maybe the 1908 Cubs. But the 2016 Cubs, I mean after all to break a 108-year drought, that’s pretty spectacular. One player, that’s…I thought Jackie Robinson immediately when you asked that question. If I had to go back before that it would be Branch Rickey. I guess they’re absolutely linked together, but I’m a big Branch Rickey fan. Branch Rickey was kind of like my administration idol, although he played for the Cardinals and, actually, the St. Louis Browns first in 1915, I think it was. And then he became a Cardinal when Rogers Hornsby was there in the early 20s when they won their first World Series. There was a time when the Cardinals were less popular than the St. Louis Browns in St. Louis, which is hard to believe. But I’d say those two guys, Rickey and Robinson, would be the two guys I’d like to work with.

RR: Switching to Lafayette, is there a memory or time at Lafayette that stands out the most?

JM: Yeah, the last football game against Lehigh in Saucon Valley. That was the last football game that I played. We beat them, [I] had a really nice game and that was the last time I wore football equipment and that was really cool. I went to a game there a couple years ago and now it’s a stadium, at that time it was just a bowl, a natural bowl in the ground. I also remember the game against Penn right here, because I was recruited by Penn coach George Azar and he wanted to make me a defensive back, and I was really appalled by that thought. So we beat Penn here and the moment the game was over I walked out to the middle of the field to shake his hand; I made sure I saw him. I guess I was being somewhat of a jerk. I also remember the game against Rutgers here, that’s the only one we lost. I guess I’m drawn to football in a weird way.

JM: Oh, that’s a tough one, actually. I think “Field of Dreams,” although “Bull Durham,” I can relate to that really well. “Field of Dreams,” I mean, that magical moment when the guys come out of the cornfield and Shoeless Joe shows up. The first time you see that, I mean before I got to the big leagues, Fenway Park was really a mystery to me and I always wanted to see what was behind the Green Monster. That was the thing I wanted to see, the street behind the Green Monster. It’s just a street, I know, but I wanted to see that. So that movie, the way it was presented, the back in time element, that’s the one that’s always been special.