Tangled in the Ivy: Men’s Basketball struggles against Cornell and Princeton 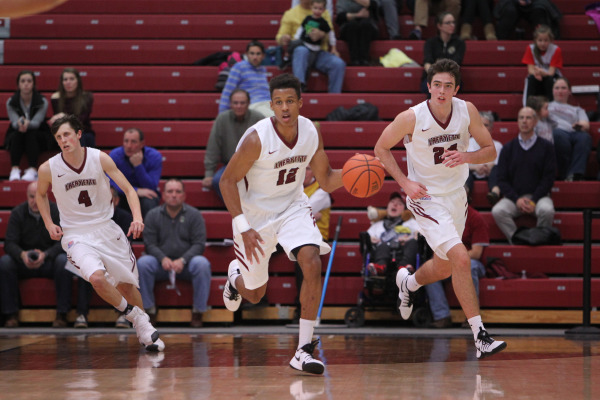 After a 2-1 start to their 2016 campaign, the men’s basketball team has been trending in the wrong direction as of late.

The team has dropped their past two games to Cornell and Princeton, both Ivy League opponents. The Leopards are an extremely young team with eight freshmen, and five of them seeing significant playing time. At times during these games it seemed as though the Leopards had trouble putting points on the board and, despite their defensive efforts, it wasn’t enough to quell the Big Red and the Tigers over the holiday break.

The Leopards were in the game the whole way against Cornell, but were unable to pull ahead of their opponent. Lafayette’s bench helped keep them in the game with 17 points, eight of them coming from freshman Kyle Stout.

The Leopards appeared to be cruising offensively and matched the Big Red through the first few minutes of the game but began to cool off and allowed a 13-0 unanswered run to concede a 28-11 lead with 10 minutes remaining in the first half. The Leopards could not keep pace with their opponents for the the remainder of the game and recorded their second loss of the season.

The Leopards had similar troubles in the following game against the Princeton Tigers and only managed to score 55 points by the end of the game. Although both sides combined for 31 turnovers, the Tigers capitalized on this and scored 17 of their points off of turnovers to the Leopards six.

“We haven’t been shooting well and we’re going to have to get scoring from someone other than Matt [Klinewski] and Nick [Lindner],” head coach Fran O’Hanlon said.

Coach O’Hanlon’s words speak to the Leopards struggles so far this season, and without a steady flow of points it seems as though the Leopards will continue to struggle to stay in games. With only four games under their belt, this extremely young team shows massive potential for improvement, particularly on the offensive side of the basketball.

On the defensive side it is a completely different story. The Leopards have forced 26 turnovers in the past two games and have held both Ivy League opponents under 80 points. If the Leopards could convert more of these turnovers to points on the other end, they would certainly begin to see some closer basketball games in the coming months.