Playing Against the Greats: Women’s Basketball competes in Hall of Fame Challenge 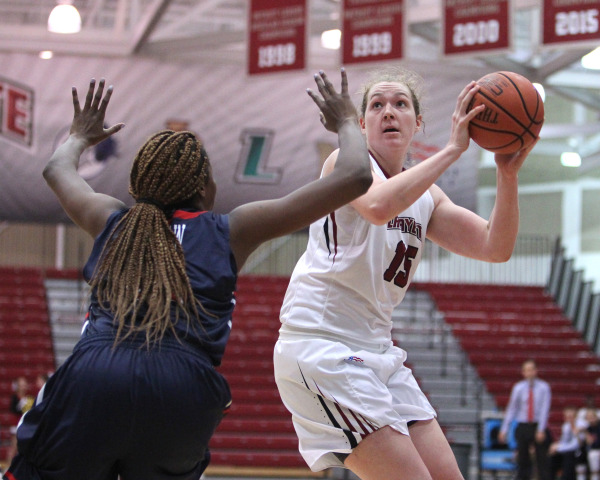 Angela Ribarich '19 eyes up a shot (Courtesy of Athletic Communications).

Despite losing, the women’s basketball team still had a Hall of Fame weekend.

This past weekend, the women’s basketball team faced off against Hampton in the Hall of Fame Women’s Challenge at the MassMutual Center. Despite a strong second half performance, the Leopards lost the lead in the final minutes of the game and eventually fell by a score of 58-55.

After recovering from a 28-20 deficit at half, the Leopards came back to take the lead at the beginning of the fourth quarter. The final minutes were back and forth between Lafayette and Hampton and with less than two minutes to play the game was tied at 50-50. With six seconds to play, the Leopards were down three points with the opportunity to tie up the game. Lafayette had a look at the basket, but the shot was blocked and time expired.

In addition to competing in the tournament, the team was also visiting the Naismith Memorial Basketball Hall of Fame in Springfield, Mass. and listened to speeches by each of the team’s coaches at a dinner hosted on the basketball court.

“I think the most impacting part was also seeing [University of South Carolina head coach] Dawn Staley on that stage. Basically what she said was it counts what you do now and what you do when no one is watching and I think that really impacted a lot of us,” junior captain Sammy Stipa said.

The experience was also meaningful for Grentz, who is trying to establish a winning culture at Lafayette.

“I think it was a great experience,” Grentz said. “Anytime you’re involved with the Hall of Fame, which is the culmination of our sport, and you can play on a court such as Louisville’s court, and you can be exposed to those kinds of teams, and see how it’s done, and be an integral part of it I think is invaluable. I think that we will use those lessons as we go forward.”

Grentz said that she recognizes her team has been struggling, but she believes that with hard work they will be able to turn things around.

“It’s always a learning situation,” Grentz said. “There’s two things we need to be able to do. We need to be able to take care of the ball better and we have to shoot the ball better, and that just takes work. I have every belief that they will do it because having watched them already with their conditioning and their training and their sacrificing and the things they did this summer to improve. They weren’t afraid to face those challenges head on, and they’ll meet these. I have great faith in them.”

Regardless of the outcome of their game against Hampton, the experience in the tournament is sure to have a lasting effect on the players.

“I think we just realized how great of an opportunity it is that we have to play basketball, especially being female…and that we have such well-respected coach, I think it brought us back to reality about how lucky we are to play at Lafayette,” senior captain Harriet Ottewil-Soulsby said.