Course taught with prison inmates discontinued for next semester 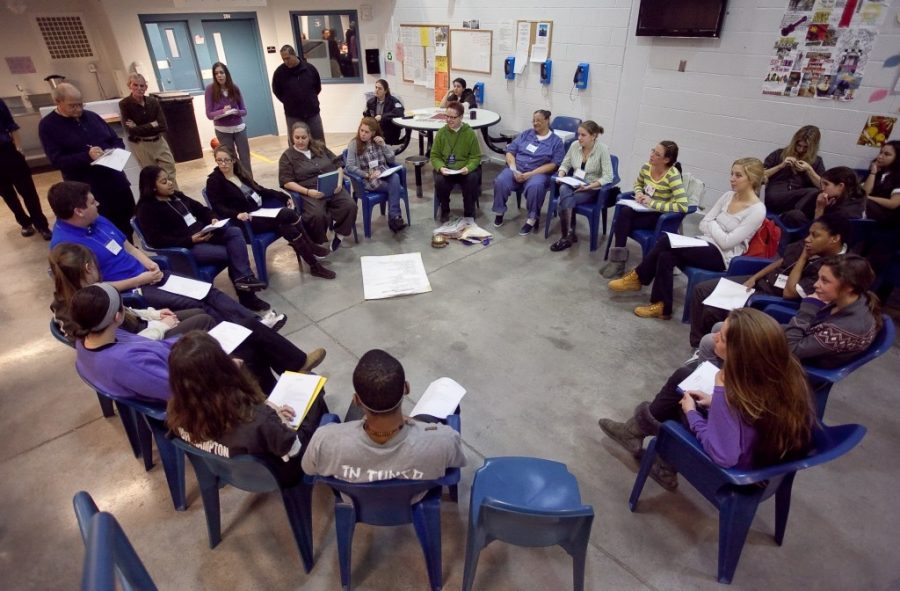 Students at Northampton County Prison in the class Women in the U.S. Criminal Justice System.

When students told professor Bonnie Winfield that they could not register for her course, Winfield said she was just as surprised as they were.

Once a week, her class, WGS 249 Women in the U.S. Criminal Justice System, meets for three hours at the Northampton County Department of Corrections to take a course alongside the female inmates there. Winfield, a women’s and gender studies professor, teaches the community-based-learning course.

Director of the Center of Community Engagement Deborah Byrd wrote in an email that the class was canceled because Winfield was no longer available to teach the course. The class would not be taught next semester, but could be taught in future semesters, according to Byrd, who is also an English and women’s and gender studies professor.

“When the Center for Community Engagement decided that it could not spare Bonnie Winfield two semesters in a row this year, we were left without anyone to teach WGS 249 and so removed the course from the spring schedule,” Byrd wrote in an email.

Winfield disagrees about her availability next semester. She said that she explained to Byrd that she disagreed with their assessment, and Winfield left the conversation thinking that class was still going to happen in the spring. Winfield did not hear anything more on the matter until students came to her after course registration to tell her that they weren’t able to register for the course, as it was canceled.

Driven by the impact the class had on her this semester, Louise Olson ’19 started an online petition to reinstate the class for next semester.

In the petition addressed to President Alison Byerly and chair of the women and gender studies program professor Mary Armstrong, Olson explained her experience in the course and the impact it had on her.

“Prior to taking this class, I knew exactly what I wanted to do with my future. One trip to the Northampton County Jail, and I was no longer able to make the same claim,” Olson wrote. “This course has not only opened my eyes to the ills of the criminal justice system in the United States, but it also taught me priceless lessons about what it means to be a human being and has given me an incredible perspective as to how fortunate and blessed I am.”

So far, the petition has garnered over 220 signatures. Olson said that one alumnus even reached out to her on Facebook to see if she could offer financial assistance.

Winfield noted that it is difficult to maintain a spot at the Northampton County Prison if you leave for a semester, and that not returning in the spring could jeopardize her chances of being able to return in the future at all.

“I do not believe [the course] interferes with my work,” Winfield said.

“I don’t understand why they could discuss it without me there, and it doesn’t interfere with my work,” Winfield said. “It takes three hours of my time on Thursday nights. It works because I am so good at forming a learning community and facilitating that conversation.”

She added that she still plans to visit the prison whether or not the school adds the course back to the schedule.

“What will this do? How, after hearing from all these students, canceling this class, does anything? Tell me what that does. On Thursday nights I’m still going to be going to the jail because I can’t lose my space and I’m not going to do that to the women. So if we’re feminists, if we care about social justice, then think about this,” Winfield said.

Winfield said Byrd then met with her to tell her that the committee agreed Winfield should not teach WGS 249 this coming spring, because they believed it “interferes with [her] work with the faculty.”

Olson said that to her knowledge it was only one of three courses available to these inmates, the other two being a parenting class mandatory in order to see their children and a Bible study class.

WGS 249 Women in the US Criminal Justice System is still canceled for the spring semester.