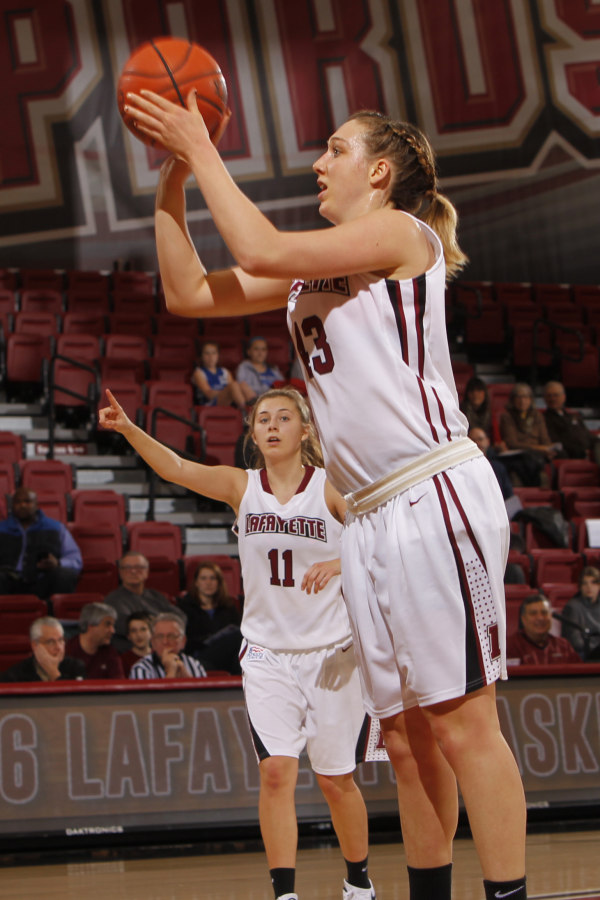 After a dream trip to the Naismith Memorial Basketball Hall of Fame, the women’s basketball team came back home to Easton in search of a victory.

They returned from the Hall of Fame Women’s Challenge in Massachusetts to host Penn before traveling to St. John’s in New York.

Junior Anna Ptasinski led the way for the Leopards against Penn, dropping 10 points on 4-8 from the field. Freshman Alexis Santarelli, senior Harriet Ottewill-Soulsby and freshman Olivia Gumbs contributed six points each, as well, but Lafayette took the loss 64-47.

Senior Maia Hood and Gumbs led the team at St. John’s, combining for 23 points and 12 rebounds, eight of which were offensive. Santarelli also collected nine rebounds and Ptasinski racked up eight points. However, 28 percent shooting and 17 turnovers doomed the Leopards and they lost 64-46.

Trying to snap the losing streak, the Leopards traveled to Princeton on Wednesday in hopes of securing that elusive second victory. Unfortunately, nothing went well for the team and they fell to the Tigers by a score of 65-27.

The team dropped to a 1-9 record, but they are working hard to turn the season around.

“[We are] definitely holding each other accountable,” Gumbs said. “Working hard to accomplish whatever we need to for that practice, whether it’s rebounding or defense, really cleaning up our offense so that come game time, those things are second-nature.”

The Leopards hope to enter the short winter break on a high note.

Gumbs’ recent play earned her the Patriot League Rookie of the Week award.

“To me, it’s that push in motivation to work harder,” Gumbs said of the award. “Once you get one of them, you want more of them. Keep working hard.”

Her performances on court show her getting comfortable in her role on the team.

Next, the Leopards will travel to Pittsburgh for their tilt against Duquesne on Sunday.