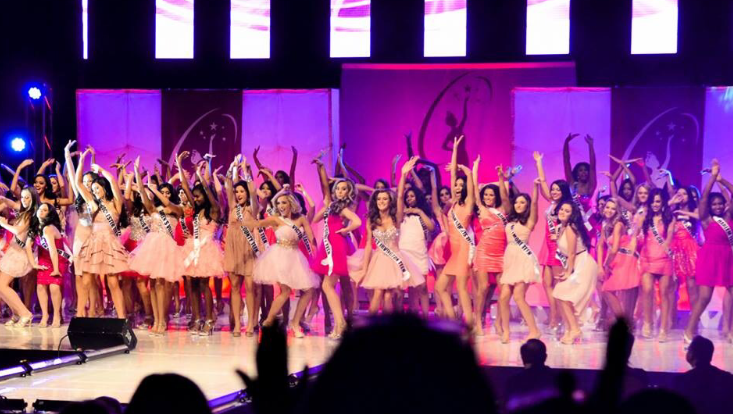 Gina Bianchi and other members of the Miss New York Teen 2014 competition wave to the audience. (Courtesy of Angelina Bianchi '18)

In her senior year of high school, Gina Bianchi ’18 fell in love with a gown she found in a store. There was only one problem.

Last weekend’s Miss Pennsylvania USA pageant drew 60 contestants from around the state to compete in several events, mainly distinguished by dress. After contestants walk on stage in bikinis and six-inch heels, they also went through short but intense interviews and cocktail dress and evening gown portions.

“You’re trying to be a role model for young women,” Bianchi said, “and you have to present yourself in a way that you can be proud for your 6-year-old self, for your little cousins, for your dad, for everyone.”

“The pageant coach teaches you how to walk, how to talk, drills you with interview questions, goes over your wardrobe, how to do your hair, how to do your makeup,” Bianchi said. But sometimes that’s not enough.

“People can prepare you as much as you want, but you never really know what you’re getting into,” she said.

In her first pageant, Bianchi said she was “blindsided” by the sheer magnitude of the production.

“I had no idea there were so many walking patterns,” she said.

Every second is choreographed. Even the 20-foot stride past other contestants to the next interview station must be practiced and carefully timed. Interviewers ask three questions generally: who you are, who your role model is, and why you want the title.

Sometimes the questions get creative. Interviewers asked her who would be the one person she would want to high five. Her answer: Audrey Hepburn. They also asked her, “If you could be any fruit, which would you be?”

“I said that I would be a pineapple, because pineapples are yellow and yellow is the color of happiness,” Bianchi said, “and I like to think that with every person I meet, I leave them just little more happy.”

In addition to the dresses – supplied by pageant gown fashion companies – and interview questions, Bianchi said a big component of preparation is make-up. It’s what can make preparation take two hours, and each contestant needs to do it themselves.

“When you have someone else do the makeup, you’re the canvas, and they’re the artist,” Bianchi said. “But when you’re doing your own make up, it’s you showing how you want to be depicted to the world.”

Even though she has never placed in the Top 15, she said she always takes something good away.

“I think that’s one of the biggest things: just figuring out who you are as a person,” she said. “I think I did a pretty good job of that this year, but you can always learn more and grow and just evolve.”

Each pageant competition costs about $1200-$1500 in fees, not including all the preparation. Money can be secured in sponsorships from local companies and charities. Often, winners of pageants use the public presence to make appearance for their chosen cause in local communities around the state.

Bianchi, an anthropology-sociology and philosophy double major with a minor in classics, has been able to keep up with schoolwork while training only by diligence and sacrificing some luxuries.

“You make time, I don’t have much of a social life. If it’s something you truly want, you make sacrifices for it,” she said.

“Putting yourself in such a vulnerable position on stage in a swimsuit and six-inch heels, you would think its very discouraging, but it’s such an empowering experience,” Bianchi added. “You leave a completely different person than you were when you came in.”

Even though Bianchi is still re-adjusting to shoes without six-inch heels, Bianchi said on Tuesday that she has jumped right back into training.

“I had chocolate cake yesterday, and training starts today,” she said.