A leader on and off the court: Anna Ptasinski nominated for national award 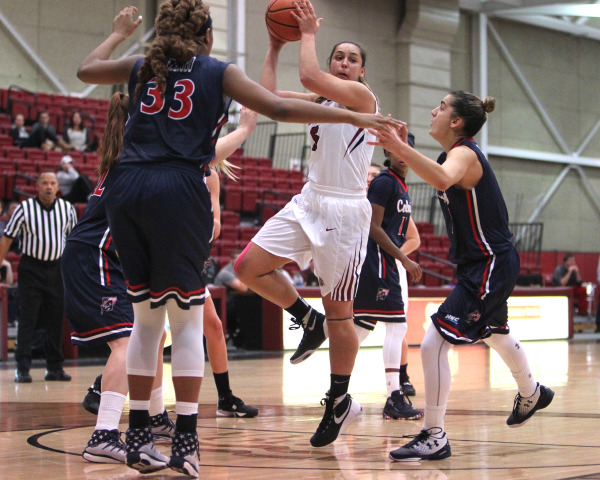 Anna Ptasinski '18 drives to the hoop. (Courtesy of Athletic Communications)

Despite being one of the lead players on the women’s basketball team, junior Anna Ptasinski is leaving her mark doing something else.

Ptasinski, a standout three point shooter Leopards, was announced as a nominee for the 2017 Allstate Women’s Basketball Coaches Association Good Works Team. The team recognizes women’s college basketball student-athletes from Divisions I, II and III for their remarkable community service achievements and is considered to be one of the most prestigious awards. Ptasinski was one of 97 nominated for the team of 10 that will be selected by the WBCA.

“It’s an honor to be recognized by the WBCA as a nominee for the Good Works Team,” Ptasinski said. “Much of my life surrounds around schoolwork and basketball, but I love participating in other extracurricular activities as well. So, I am really thankful for the Good Works Team to acknowledge motivated athletes and their successes on and off the court.”

As a biology major, Ptasinski has done most of her work in the medical field. She has volunteered at the University of Colorado Hospital and Littleton Adventist Hospital.

“I enjoy getting to see the environment of healthcare and build relationships with the residents,” Ptasinski said. “The various experiences in hospitals have put me outside my comfort zone and taught me much. Our actions can either positively or negatively influence those around us, so people should consciously make an effort to benefit the communities we are a part of.”

In addition to her healthcare service, Ptasinski also volunteers coaching a fourth through sixth grade girl’s basketball team in Forks Township. It is one of her favorite things to do, mostly because she can so easily connect to it.

“It brings me so much life to help share my passion with future generations of basketball players,” Ptasinski said. “I was once one of those little girls who dreamt of playing college basketball, so I want to inspire the same dream in others.”

Staying along the lines of serving the community, Ptasinski said she aspires to go to medical school when she graduates so she can continue her passion of helping others in need.

The 2017 Allstate WBCA Good Works team will be announced in February.