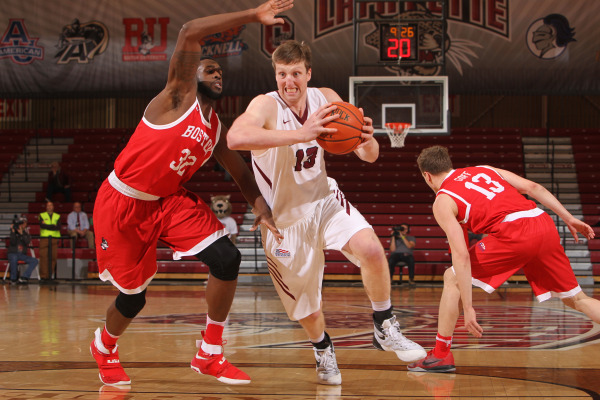 While most students left in mid-December for the winter interim session, the Leopards basketball team still had a lot of work to do.

Over the course of the break, the Leopards played in ten games, going 3-7. This included a blowout win over Moravian College and a tough fought victory against Army, mixed in with a couple of double digit losses. But the most interesting game over the break came against cross-valley rival, Lehigh.

Going into Bethlehem this past weekend, Lafayette matched up against the Mountain Hawks for the first time this season in what proved to be a thriller. Albeit a losing effort, the Leopards showed tremendous poise and grit by keeping the game close and competitive throughout, especially against a much improved Mountain Hawks team.

Senior Nick Lindner, who has been inconsistent this season, was on his game. One of just three Leopards to eclipse double digit scoring in the game, Lindner poured in a team high 23 points, going an astounding 7-11 from beyond the arc and a 8-14 shooting line overall. Throughout the game, every time it looked like the Mountain Hawks were about to pull away, Lindner would look for his shot and drain it, fending off Lehigh for yet another play.

But Linder was almost equally matched on the other end by Lehigh’s Austin Price, who notched the game high for points with 24. Hitting four of eight triples, Price allowed the Mountain Hawks to keep the Leopards at arms length throughout the game, making sure that they would never gain the upper hand.

While the Leopards held the advantage from beyond the arc, the real difference in the game was made from the free throw line. The Leopards converted five of their seven attempts from the charity stripe, while the Mountain Hawks got to the line a lot more frequently, hitting 19 of 23 free throws. Although the final score was 75-68 in favor of Lehigh, the game was closer than the score seemed as the Leopards kept it tight the entire way showing a heightened sense of intensity against their rivals.