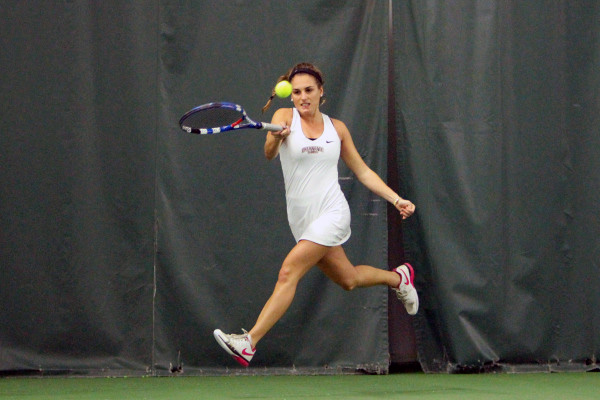 The men’s top three singles spots were lost due to graduation, and with no seniors on this year’s roster, younger talent will be expected to step up for the Leopards.

Sophomores Andrew Reed and Matthew DeBenedetto are back and will be competing in the third and fourth spots.

With a lot of young players looked upon make an impact, the team can expect a lot of growth and improvement to occur as the season goes on. As doubles teams are set and able to compete together consistently, the team should be able to earn wins in those matches as well.

As great as it is to have young individual talent stepping into the lineup, inexperience at the college level could prove to hinder some of the younger players’ performances.

What to watch for:

Freshman Blake Oslan, one of the best incoming talents to make his way to Lafayette’s tennis team in years, is expected to have much success in the top singles spot throughout the spring.

Army was voted into the top spot of this year’s Patriot League Tennis preseason poll with Navy and Boston University placed second and third, respectively.

“Everyone can play really well, and we all help each other get better in practice,” captain junior Chris Kim said. “I think we’re going to improve every match.”

Three of the top four singles players graduated last year, including Caroline Nixon, who held the number one singles spot for nearly all of her time as a Leopard.

Senior Rocine Moschella, co-captain and Nixon’s doubles partner last year, is back for her final year and currently holds the team’s number one singles spot.

The women’s team is expected to have many solid doubles performances this year, which should help them win in close Patriot League matchups.

The Leopards are currently facing trouble staying consistent from match to match and are hoping that younger players gaining experience will help solve this problem.

What to watch for:

Freshmen Grace Conrad, Katie Hill and Meredith Block are all expected to have spots in the singles lineup throughout the spring.

Boston University topped the women’s Patriot League preseason poll for the fourth year in a row since joining the league. Navy was voted into second place and Army was voted into third.

“We all really get along and help each other work harder,” Moschella said. “We have a really solid one through six lineup.”