At Lafayette, a wealth gap with a chance of mobility 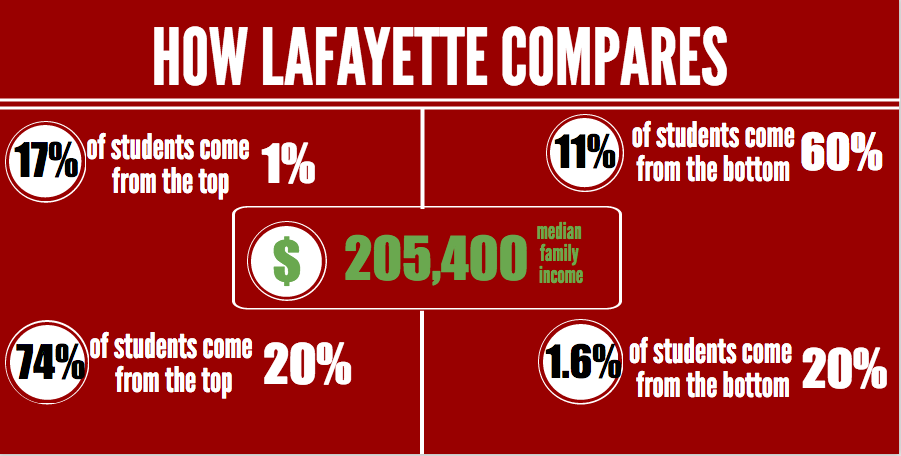 Only 38 colleges in the country have more students from the top 1 percent than the bottom 60 percent. Lafayette ranks 11th in this group for the greatest income gap, according to recently released data.

Millions of anonymous tax records collected by the Equality of Opportunity Project and published through the New York Times revealed for first time in stark terms what many at Lafayette already assumed: the great majority of Lafayette students come from wealthy backgrounds.

At the same time, the project also discovered that Lafayette has been one of the most effective colleges in Pennsylvania at bringing their poorest students into wealth by age 34.

According to the records, 17 percent of Lafayette students in 2009, the most recent year available, came from families in the richest 1 percent of the country’s population. Only 10.9 percent came from the bottom 60 percent of the nationwide income distribution.

Lafayette was third highest of 142 colleges in the state for the number of students from the top fifth of the population, at 74 percent. This stood in strong contrast to the share of the bottom fifth, at roughly 1.6 percent, ranking it fourth lowest in the state.

The data, however, pointed to a positive: Lafayette ranked second in the state in its ability to help those poor students become rich graduates. According to the researchers, the bottom fifth, although numbering only about eight students per class, had a 59 percent chance of making the jump into the wealthiest 20 percent. In this respect, Lafayette ranked 38th of 2,135 colleges in the country.

The minimum annual income required to be in the wealthiest 1 percent of the U.S. population was roughly $465,000 in 2014, according to Investopedia. The wealthiest fifth of the population began at about $117,000 a year. The poorest fifth had a maximum income of about $25,000.

Lafayette students’ median family income in 2009 was $205,400, about the 94th income percentile nationally. However, colleges and families across the country experiencing financial difficulties in this year may have created such a spike, which was about $50,000 higher than the previous 10-year median. For example, Lafayette’s endowment dropped 27 percent in the two years before 2009.

Bucknell and Colgate Universities were the only other schools in the Patriot League to consistently enroll more higher-income students and fewer poorer students than Lafayette. Of 2,395 colleges, Lafayette ranked 15th in the share of the student population from the top 20 percent.

The study, authored by five academics around the country, comes at a momentous time for Lafayette, as it announces several initiatives aiming to increase the affordability of the college. Lafayette intends to bring in revenue from residential and academic expansion and the addition of 400 more students that it could use to fund need-blind admissions.

President Alison Byerly said this kind of data was consistent with what the administration had believed about the college and what prompted moves to become more affordable. As Lafayette moves to make this expansion, it must navigate a balance between admitting more wealthy students to increase access for poorer students.

Vice President of Enrollment and Financial Aid Greg MacDonald noted that the initiatives since 2009 have already made progress toward greater affordability.

“We have been aiming to increase the number of students entering the college with need based financial aid,” MacDonald wrote in an email, “and we are starting to gain traction on this important metric. The fastest growing portion of our applicant pool in recent years has been ‘above profile’ candidates with financial need, so the timing could not be better for increasing our need based financial aid budget.”

Previously, the most widely available data on college socioeconomics came from a measure of the number of Pell grant recipients. After finding that Lafayette ranked 133rd of 179 colleges in the College Access Index last year, Lafayette officials sought to admit more students from poor backgrounds.

According to the Equality of Opportunity study, the high median family income may lie in the distinction between affordability and accessibility, or the ability to be admitted and attend. Even if a family could afford the “sticker price” with financial aid, how likely was it that the college would want to admit that student and pay that aid?

The study found that the higher the “sticker price,” the lower the access poor students have. The same relationship held when comparing access to the net price of college for poor students, or the cost after all aid. Nick Flamang, a predoctoral fellow who worked on the project, noted that the team’s work was meant to motivate more research into these kinds of relationships.

While Lafayette admissions are need-aware, they do not have the income information for the majority of applicants. For example, admissions did not know the wealth background of 63 percent of students in 2016.