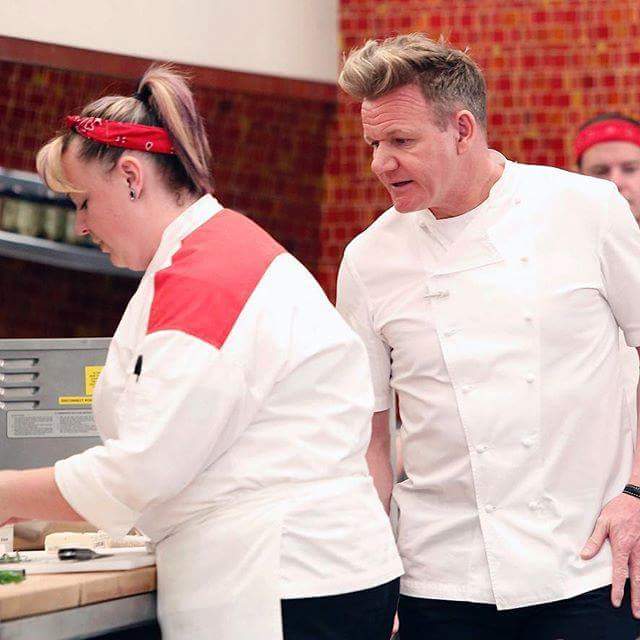 In the summer of 2014, Heather Williams was working at Gilbert’s as a cook for Lafayette Dining Services. When she got home from work one day, her mother had a surprise: a casting application for “Hell’s Kitchen.”

“I was like, ‘You’re nuts. Why would you do that to me? [Gordon Ramsey] is crazy. I never want to do that,'” Williams said.

Within an hour of finding this out, Williams was contacted about casting for the show. Now, two years later, the season is airing, and Williams is one of three remaining contestants.

After being selected for the show, Williams left Easton to film over the course of five weeks in late fall of 2014. According to Williams, she then returned to Lafayette from January 2015 through November 2015, before ultimately quitting due to issues with the management.

For the past year and a half, Williams has been working as the sous chef at Marblehead Chowder House in Easton. However, she said that she has missed interacting with Lafayette students in her old “home away from home” – better known as Lower Farinon Cafe.

While Williams spoke of her experiences on the show as if it were just yesterday, it’s been over two years since filming. At the time, Williams’s son was just three years old, and the contestants couldn’t call or talk to anyone during those five weeks.

“Once a week, they would give us an update of how our family was doing,” Williams said.

While Williams was away, her mother took care of her son. Williams said that her mother chose not to notify her of her son’s two trips to the ER during filming, knowing that if she found out, Williams would fly home immediately.

“She knew that I wanted to do this, and I deserved to do it,” Williams said.

Williams’s initial intimidation by host and celebrity chef Gordon Ramsey was understandable, as he is often portrayed as “a monster” in the kitchen. However, her one-on-one experiences with the chef changed her view of him.

“When I got to talk to him one-on-one, he had me crying because it was like talking to my dad,” Williams said. “He told me that I had a lot of confidence, and I just laughed because I really don’t.”

“I am my worst enemy and I literally second guess myself with everything, but when I went out there I was like, ‘You know what, I’m just gonna go for it. I made it this far. I made it past all these people. It’s been working so far,'” she added.

Since the show began to air this past September, that confidence has been challenged as Williams sees her experience unfold on TV.

“They portrayed me as this home-wrecker and I was being demolished on social media,” Williams said. “I just won’t go on it.”

While on the show, Williams met fellow contestant Andrew Pearce, who appeared as her love interest. Little did Williams and the other contestants know at the time, Pearce was engaged to someone else while filming.

“It’s easy to be perceived as something when things are cut and pasted together,” Williams said. “At the end of the day, I know who I am and anyone who knows me knows who I am.”

Williams hasn’t talked to Pearce since the show, and despite being referred to as “arrogant” and “white trash” on social media, she still sees it as an incredible experience.

“In five weeks, the stuff that we did…I won the Vegas challenge,” she said. “I could never afford that entire experience.”

As the Feb. 2 finale nears, Williams could be gearing up for a huge lifestyle change. The winner of “Hell’s Kitchen” gets a Head Chef Position at Yardbird Southern Table & Bar at The Venetian Las Vegas.

“I’ve worked so much and then I had my son, so when am I ever going to do this stuff?” Williams said. “Win or lose, I would do it again in a heartbeat.”