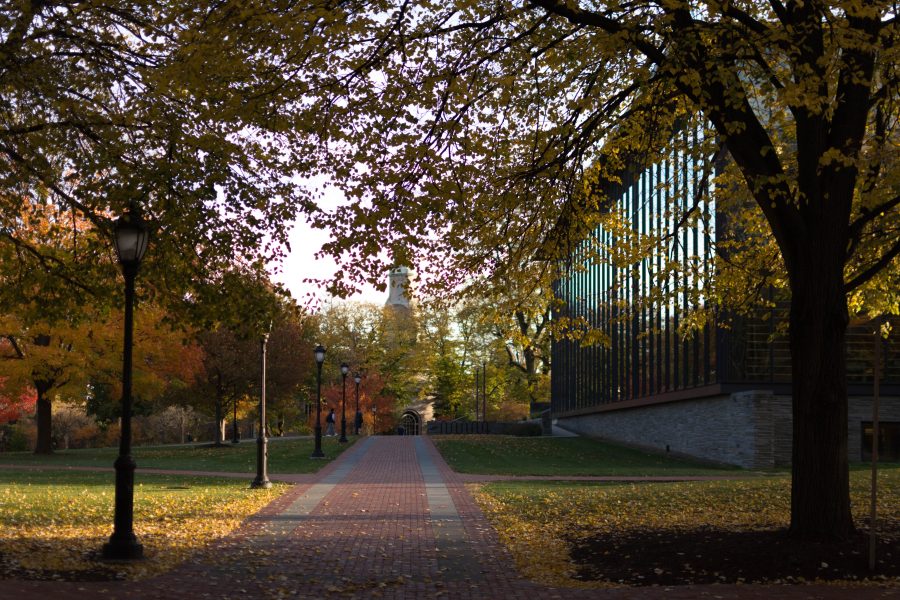 The Climate Action Plan 2.0 outlines projects to be completed for Lafayette to obtain carbon neutrality by 2035. (Lauren Fox '19)

President Alison Byerly joined other college and university presidents last week when she signed her fourth letter supporting policies and values that could be threatened under the new Trump administration.

It asks Pennsylvania U.S. senators to support a proposed act that would grant many undocumented immigrants the ability to work in the United States legally. The other three letters cover a range of topics, including preventing acts of hate and asking the government to uphold the Paris Agreement on climate change.

Byerly does not see these as political statements. Rather, she said that she signed these letters because they affirm and uphold the college’s values.

Two of the letters are addressed to then President-elect Donald Trump. One of those letters is also addressed to members of congress.

The letter she signed last week urges senators Pat Toomey and Bob Casey, Jr. to support of the bi-partisan Bar Removal of Individuals who Dream and Grow our Economy (BRIDGE) Act in Congress.

This act would basically uphold provisions under former President Barack Obama’s Deferred Action for Childhood Arrivals (DACA) program – which Trump could eliminate – allowing many undocumented immigrants who were brought to the United States as children to work without fear of deportation for the next three years. If passed, the goal is likely to replace it with a more permanent and comprehensive law before those three years are up.

“It’s essentially kicking the can, but with a congressional action that can’t be rescinded by the president,” immigration attorney William Menard said.

While President Donald Trump has advocated for getting rid of the DACA program, his administration’s stance on it now is unclear.

According to President of Haverford Kimberly Benston, who organized the letter, it has been signed by more than 65 Pennsylvania college presidents.

“DACA and undocumented students have acted in good faith to become well-educated contributors to our society and, having been invited onto our campuses in pursuit of this ‘dream,’ deserve our strong support,” he wrote in an email.

At least one Lafayette student has benefitted from DACA, and Byerly signed a statement at the end of last semester supporting the program.

“I feel that, having admitted these students to Lafayette, we have clearly made a commitment to them that it is my job as president to maintain,” she said.

Another letter Byerly signed, released Dec. 19, asks Trump and congress members to support the Paris Agreement, environmental research and “[i]nvestments in the low carbon economy” – something Republicans typically have not.

“The petition on climate change really is about the importance of respecting scientific evidence and understanding the impact of human behavior on the climate,” Byerly said, “and I view that as not a political position, but really as a kind of scientific fact.”

Once members of Lafayette’s Environmental Science and Studies Advisory Committee got word of Byerly’s signature on this letter, several of them wrote her a thank-you note, according to committee member and professor of geology Kira Lawrence.

Asking for support of the Paris Agreement, the letter also reads that many of the more than 230 presidents that signed it work for institutions that “have voluntarily set even more aggressive carbon reduction goals to lead our sector forward and to demonstrate what is possible for others.”

In 2008, former Lafayette College President Dan Weiss signed the American College and University’s Presidents’ Climate Commitment (ACUPCC), and the Climate Action Plan was developed by the college in 2011.

Correction: A previous version of this article misspelled immigration attorney William Menard’s last name as “Mernard.” This article has been corrected to reflect that change.