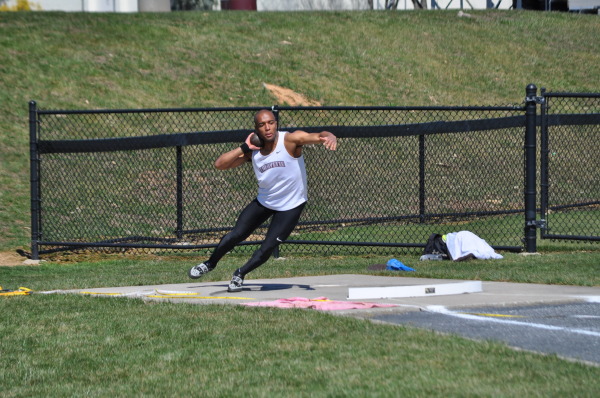 Katelyn Arnold: This weekend you placed fourth in the shot put and second in the weight throw at the Covert Classic. You also placed first in the weight throw last weekend at Lehigh, which qualified you for the IC4A Championships. Can you tell me what it’s been like to experience this success?

Dave McGriff: It’s good to see the hard work pay off, because it’s been a long time since I’ve PR’ed in anything really. Last spring in the discus might be the record, and I threw pretty well after that, but it was never anything better. It was good to see things actually come together.

KA: So how does the indoor season compare to the outdoor season for your specific events?

DM: I’m actually like significantly worse at indoor. In indoor, it’s the shot put and a 35 pound weight, and I’m like a 200 pound dude. Being smaller makes me worse at the heavier ones. In outdoor, it’s like a 4.5 pound disc and a 16 pound hammer. It’s a big struggle to get through the indoor season and still try to be relevant.

KA: Which do you prefer?

KA: What are your main focuses and goals for this indoor season?

DM: Really to do the best I can. We’re trying to work on setting our sights higher as a team, so trying to lead by example to try to get as much success as I can to maybe try and inspire the rest of the guys to do what they can. Not just qualify for the Patriot League, but for the IC4A and all that.

KA: How do you think the indoor season will help you prepare for the spring?

DM: Competition-wise, when you’re used to being on the lower end of the Patriot League scoring-wise [in indoor], trying to scrap for those little points kind of prepares you mentally to go into a season when you’re better and are trying to win.

KA: So you’re also in ROTC. What does that entail?

DM: Morning workouts three days a week, we’ve got a lab on Thursday and I’ve got a class three hours once a week.

KA: How hard is it to handle track, ROTC and school on top of all that?

DM: It’s gotten easier as I’ve gone on, but I guess you just have to live differently. You have to be a wake up early, go to bed early kind of guy. You’ve got to limit the amount of hobbies you have.

KA: What is your favorite part of ROTC?

DM: Probably lab because that’s what is preparing you to do your job later.

KA: What is the most difficult part of ROTC?

KA: Do you think your experience in ROTC has helped you at all in track?

DM: Definitely. It’s been tough to get going. I had to come here a year late because I had to reapply for my scholarship. Running and swimming is very hard for me, so it gets me where I can mentally handle things that don’t come naturally. Some of the sucky stuff we have to do, where you’re sleeping outside and it’s like 35 degrees. It’s more of a mental edge than anything else.

KA: Do you know what you hope to do after graduation?

DM: I want to be a field artillery officer.

KA: So you’re also a government & law major. Which class has been your favorite?

DM: Anything with professor Feola.

KA: What has been your favorite place to compete at for track?

DM: Anytime I get to go to New Jersey is cool, because that’s where I’m from and my parents get to come. Aside from that, literally Lehigh because, in the track, it’s like, ‘Well, is it a banked indoor track so we can run faster?’ But for us it’s a ring, it’s always like a circle. So I don’t really care where it is, so because of that I just want it to be closer. So, I’m about the 30 minute drive.

KA: What song has to be on your pregame playlist?

DM: Actually, me, Pat and Dan, the three circle throwers, we always get like an album going. One time it was “My Beautiful Dark Twisted Fantasy” by Kanye. Runaway on repeat. Other times we’ll do like any Backstreet Boys song, “Larger than Life.”

DM: Probably Bruce McCutcheon. I’ve always wanted to grow a good mustache but I don’t really have the genes for that.

DM: I haven’t played the saxophone in like four years…

KA: So that would make it a hidden talent.

DM: It would make it very hidden. Put that in there: ‘He can play the saxophone. Sort of, kind of. Don’t put him on the spot though.’