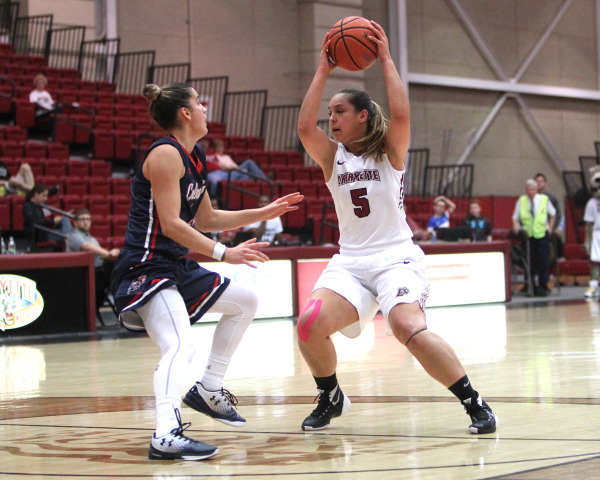 Photo courtesy of Athletics Department. The Leopards face-off at an earlier basketball game.

After losing all of their last 22 games, the women’s basketball team finally got back into the winning column with an 85-70 victory over Holy Cross.

The last time the Leopards won a game was in their season opener against LaSalle. To put that into perspective, that was two days after Donald Trump was elected – not sworn in, but elected as president. Since then, the team has lost 22 straight games and hasn’t showed many signs of improvement.

One sign of improvement, however, has been the play of freshman Olivia Gumbs. In their 75-58 loss to Boston University, Gumbs scored 19 points and snagged 11 rebounds. In their game against Holy Cross, Gumbs started right where she left off scoring 10 points in the first six minutes. She finished the game with 25 points – a new career high.

But it wasn’t just Gumbs who was scoring for the Leopards. For the first time this season, Lafayette had four players reach double-digit scoring. Seniors Ashley Lutz and Harriet Ottewill-Soulsby had 13 and 15 points, respectively, while junior Sammy Stipa added 12 of her own.

The Leopards jumped out to an early lead and were up by three points at halftime. Coming out in the second half, the Crusaders went on an 11-0 run to take an eight-point lead. The Leopards responded, going on a 17-4 run of their own to take the lead back. From that point on, Lafayette did not look back and coasted to an 85-70 victory. This was the largest offensive output by the Leopards since 2014.

Lafayette has six games before the start of the Patriot League Tournament. If they can continue to play like this, they may be able to make some noise leading up to and in the tournament.

The Leopards next game will come against Navy at home, where the Leopards will try to notch their first win at the Kirby Sports Center this season.