Finding their groove: Men’s basketball is getting hot at the right time 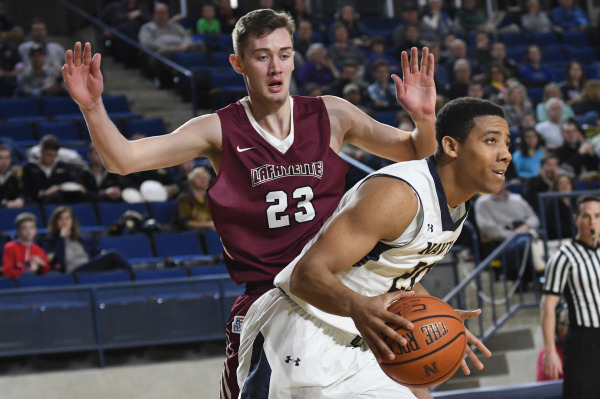 Over the past week, the men’s basketball team is playing some of their best basketball this season.

Despite going 1-1 in the past week, with a loss to Navy and a victory over American, the Leopards have been playing very well.

After leading by three at halftime against Navy, the Leopards upset bid was squandered by a late push by the Midshipmen who outscored the Leopards by a margin of 11 in the second half en route to a 68-60 victory. The Midshipmen were able to go on 9-0 run in the latter part of the game in which they hit three triples in a row – marking a key momentum shift in a crucial part of the game.

Bryce Dulin was once again the star for Navy. His 18 point performance was highlighted by four late free throws to ice the game.

But the big difference in the game was reflected on the glass. A 37-23 rebounding margin in favor of the Midshipmen led to 15 second chance points. This ended up being the game changer as the Leopards were’t able to complete any second chance points in the entire game.

On Wednesday, the Leopards took on fellow Patriot League basement dweller American. Both teams came into the game with the same conference record, so it was critical for the Leopards to win for better seeding in the conference tournament.

The Leopards got off to a hot start and didn’t look back, beating the Eagles 78-65. After a pair of and-ones by freshman Kyle Stout and sophomore Paulius Zalys, the Leopards jumped out to a double digit lead in the first half. Both teams shot roughly the same percentage from the field, but the Leopards hitting twice as many three pointers as the Eagles proved to be the difference.

Junior Matt Klinewski was the star for the Leopards, scoring 23 points and grabbing eight rebounds. Not far behind him, though, was senior Nick Lindner who scored 19 points, including six three-pointers.

Next up for the Lafayette is rival Lehigh. In the final home game at Kirby Sports Center this season, the Leopards look to beat the Mountain Hawks after dropping a game to them earlier in the season. With a win, the Leopards could move into position to possibly host a play-in game for the Patriot League Tournament.