‘A Cure for Wellness’: Verbinski’s new movie too drawn out 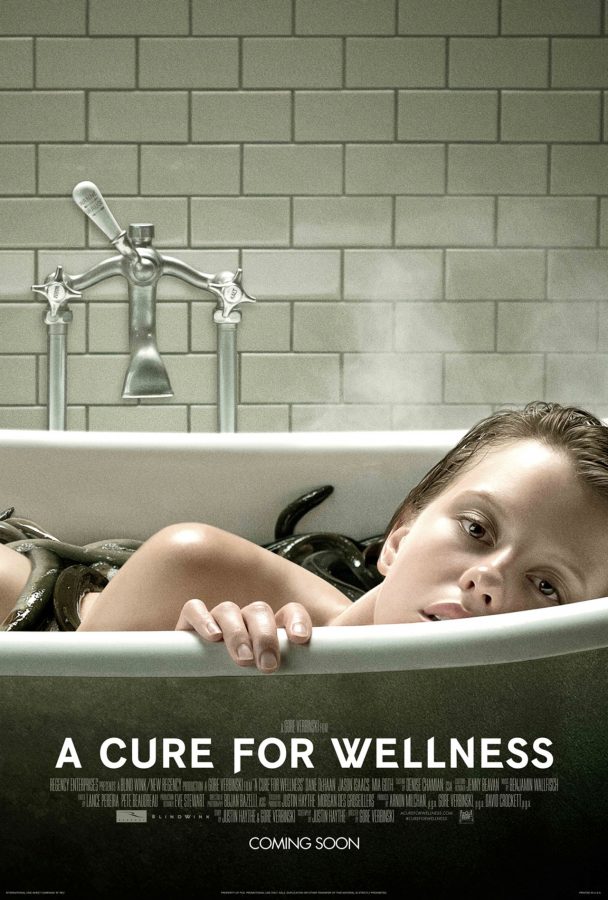 'A Cure for Wellness' is the creepy new film directed by Gore Verbinski (Courtesy of ComingSoon.net).

If “A Cure for Wellness” is one thing, it is original.

Gore Verbinski’s film is a fantasy, gothic and horror film starring Dane DeHaan, Jason Isaacs and Mia Goth. It follows the story of Lockhart (DeHaan), an economist working at a failing firm. When his bosses commission him to travel to Sweden to get the company’s missing CEO, Lockhart gets into a car crash. As a result, he must send time recovering at the wellness spa and sanitarium where the missing CEO was last seen. While in recovery, Lockhart meets Vulmer (Isaacs), the leader of the institute, and Hannah (Goth), a curiously naive girl who has been at the spa since she was a child. Lockhart begins having visions as he slowly unravels the mysterious events surrounding what Vulmer and patients call “the cure.”

Clocking in at two and a half hours, “A Cure for Wellness” drags on. Unlike last year’s hit, “The Conjuring 2” – a film with a similar run time – the film is is slow.

Beyond that, there are disturbing sequences and unresolved plot points which may make the film inaccessible to a lot of viewers. While I found myself on the edge of my seat during the disturbing moments, I could certainly see how other viewers may not like them. On top of that, strange parts of the plot are not resolved by or until the end of the film. It requires more than one viewing for a good understanding of what is happening. As the film wrapped up, I found myself wanting to watch certain sections again, but I doubted I could sit through a second viewing.

With this all being said, Verbinski still makes a noteworthy film. “A Cure for Wellness” is filled with beautiful imagery of the Swiss Alps, and one feels the acute isolation of the wellness spa. It is also filled with tons of creepy imagery, similar to that of Verbinki’s previous film “The Ring.” There is a lingering feeling of dread as one watches and one subtly fears for the character of Lockhart, even when he is not in danger. This feeling is rarely curated by modern horror films.

This film will not resonate with most people who watch it. But, if you fall into the category of someone who loves the cult-like feel of a film like “The Shining,” then “A Cure for Wellness” might be appealing.