Blown out by rivals: Men’s basketball loses against Lehigh and Bucknell 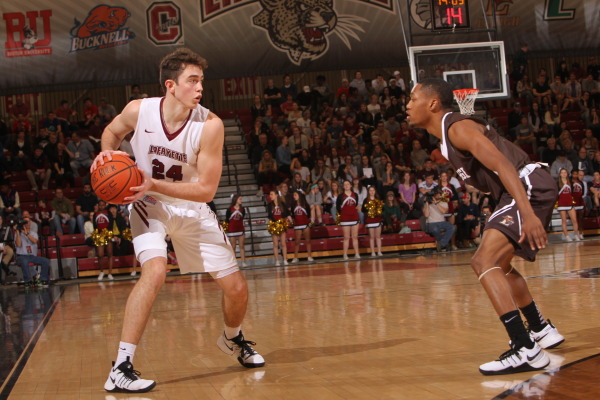 In his last game at Kirby Sports Center, senior Nick Lindner looked to go out with a bang against rival Lehigh.

The Leopards started the game going up 2-0 on a pair of free throws by junior Eric Stafford. Then, Lehigh went on a 12-0 run and had all the momentum. The Mountain Hawks held a double digit lead the rest of the way and took round two of the rivalry game. Lindner led the Leopards in scoring with 15 points, while sophomore Paulius Zalys was the only other Leopard to finish with double digit points with 11. Tim Kempton, the senior forward for Lehigh, continued to be the thorn in the Leopards’ side as he finished with 22 points and 10 rebounds.

On Wednesday, the Leopards traveled to Bucknell to take on the Patriot League regular season champions. After struggling against Lehigh, junior Matt Klinewski bounced back scoring a game-high 20 points and grabbing five rebounds. Unfortunately for Lafayette, the Bison were too much to handle and the Leopards ultimately fell to them by a score of 94-64.

One key problem for the Leopards was the three point shooting of the Bison. Bucknell was 17-40 (42.5 percent) from three, which was the key difference in the game. Freshman Lukas Jarrett had a standout game, scoring a career-high 13 points and securing eight rebounds.

Next up for the Leopards is their regular season finale Saturday at Colgate University. With the loss against Bucknell University and Army beating Boston University, it is now confirmed that the Leopards will not be hosting an opening round game of the Patriot League tournament. If the Leopards win on Saturday, they will travel to West Point to take on Army in the first round of the Patriot League Tournament. If they lose, they will either play Loyola or Colgate depending on the outcome of the Loyola-American game.

It’s almost that time of the year: March Madness. Only time will tell if the Leopards have any magic up their sleeves to make a postseason run.